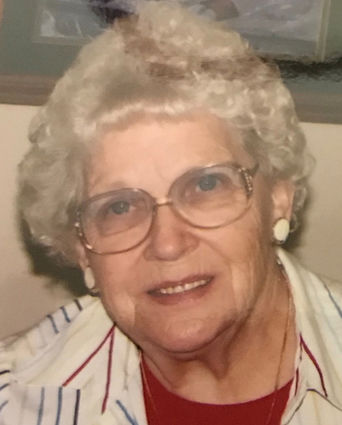 Maxine was born to Clement Eugene Crawford and Mae Augustine (Taylor) Crawford in Pomeroy on November 9, 1931. She attended grade school in Pomeroy and graduated from Pomeroy High School.

She was crowned the Garfield County Rodeo queen in 1949. That same year, Maxine married Jerry Mock on June 17, 1949, in Pomeroy.

She worked as a telephone operator, a bookkeeper for Cardwell's Department Store and Able Automotive; in customer service for Pomeroy Pharmacy and OM Scott & Sons, just to name a few.

Maxine was interested in photography, metal detecting, gambling and garage sales. She was the Garfield County Fair apple pie champ for many years and crocheted afghans and tablecloths.

She was preceded in death by her father, Clement Crawford; mother, Augustine Crawford and brother Ron Crawford.

A service was held at the Richardson-Brown Funeral Home on October 30, 2019. Rev. Roger Pederson officiated.

Five of her grandsons served as pallbearers.