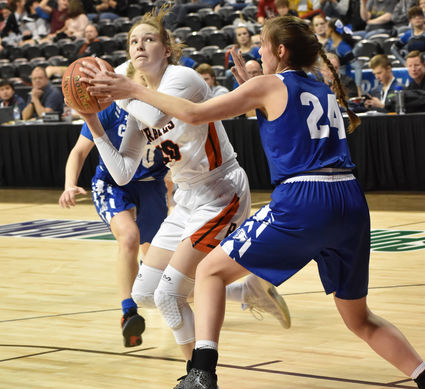 Maddy Dixon (30) left no doubt of who dominated the battle of the bigs in the Lady Pirates' opening game of the 1B State Tournament against Curlew. Dixon scored a game-high 26 points, grabbed eight rebounds and hit a pair of treys to almost single-handedly power Pomeroy past the Lady Cougars.

SPOKANE–It was the battle of the big forwards and Lady Pirate Maddy Dixon showed the Curlew Lady Cougars how badly she and her teammates wanted to make this appearance at the 1B State Tournament one to remember as Pomeroy opened the 2020 tournament with a 41-26 win.

The team advances in the winner's bracket to face Southeast 1B rivals Oakesdale in the semifinals. The Lady Nighthawks defeated Neah Bay 58-49.

Dixon almost single handedly carried the team to an 18-8 half-time lead and continued to play a big role in the team's offense in the second half, finishing the game with a game-high 26 points, eight rebounds, two assists and two blocked shots.

Curlew's 6-1 senior post Korin Baker came into the game averaging 22.3 points per game and 13 rebounds per game, but buckled under Pomeroy's tenacious defense. Baker fouled out with five minutes to play, finishing with 13 points while only three other teammates scored for the Lady Cougars.

Dixon had a good game to start the tournament off-at last. "For me, we've been here two years in a row and I was excited," the 6-1 senior post remarked. "I haven't had the best 'first day at state.' One year I was sick, one year I had an allergic reaction. So I was like 'I've got to get through this game.' And I was excited and we did."

Dixon also energized the crowd by hitting a pair of three pointers in the first quarter.

Pomeroy's game plan worked, Dixon said. "We kind of assumed that we're going to be playing Curlew," Dixon said, "so our posts have been doing a lot of post work and practicing stopping her on defense, first of all, so that she couldn't score, and working on getting around her long arms to draw the foul and to make the basket first."

The game plan looked like it worked. Baker scored most of her 13 points in the first half, heading to the bench at the 4:20 mark in the third quarter, with four fouls. When she got back in the game late at the five-minute mark with her team trailing 30-17, she promptly fouled Sydney Watko and was out.

"We watched a little film and we knew where she wanted to cut and so my job was to pressure her and try to keep her out of the key as much as possible," Dixon said of Baker. "Because when she does get in there, she's good and she can go up short."

Curlew's Claire La Due was another threat the Lady Pirates were aware of and planned for, Dixon said. "Sydney [Watko] did a good job of stepping up and taking her and when Baker wasn't in, then I was able to take her," Dixon said. "And our guards did a really good job of pressuring their guards so that helped us out a lot there."

The Lady Cougars won the opening jump, but couldn't convert and both teams traded unproductive possessions for the first two minutes before Heidi Heytvelt broke the ice with a bucket.

Curlew's Korin Baker followed but then Dixon answered with a three pointer. K. Baker answered, and, after a free throw by Heytvelt, K. Baker hit another bucket to make it 7-6.

Dixon set the Pirates on course with another energizing three pointer, and finished more baskets, part of a 9-2 run to finish the first quarter ahead, 14-8.

The second quarter was a marked defensive battle as Dixon counted two baskets, at 6:00 and 3:37, while the Lady Cougars struggled but went scoreless, ending the first half with the Lady Pirates ahead 18-8.

Curlew opened the third quarter with a rally. K. Baker hit a pair of free throws. McIrvin made two of her own and K. Baker swished a trey at the six-minute mark pull the Lady Cougars within three, 18-15.

Dixon rolled up her sleeves and chipped in a pair of free throws on K. Baker's second third foul at 5:08, sending the Lady Cougar post to the bench. Dixon, put in another bucket and Heytvelt scored to give Pomeroy more breathing room, 24-15.

Curlew's Emma Lena Baker, a 5-7 eighth grader, popped in a bucket, then Dixon and Watko responded with baskets to finish three quarters with Pomeroy leading 28-17.

The intensity remained for the first two quarters of the fourth stanza-the Lady Pirates wary that Curlew could explode at any minute with a barrage of buckets to make it a contest. Dixon calmed those fears with a basket at 6:02. Curlew's E. Baker scored and Macy Singer sank two gifters, but then it was the end game-three minutes and less-and the Lady Cougars resorted to fouling to derail Lady Pirate possessions.

Dixon, Heytvelt and Emma Severs methodically hit free throw after free throw down the stretch to the 41-26 ending buzzer. 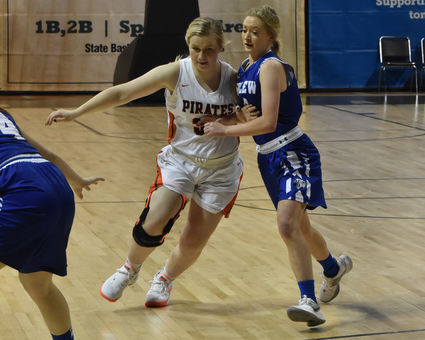 The Curlew defenders were physical in their defense of their goal, as evidenced by Emma Severs' attempt to make a move through the key.