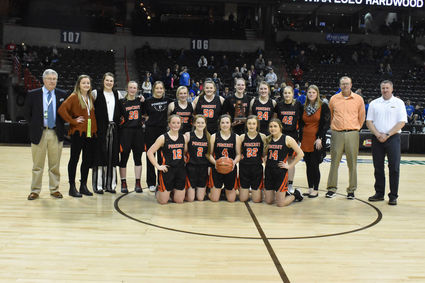 SPOKANE–The Lady Pirates defeated Mount Vernon Christian 48-26 in the consolation round to bring home a bittersweet third-place trophy and cap a stellar year that didn't end as planned but was filled with accomplishments and success.

Pomeroy finished the season 23-2, counting losses only to Southeast 1B rival Oakesdale, which finished second in the championship game to Inchelium 46-34.

At the Hardwood Classic, all three games were taut, low-scoring defensive standoffs as the Lady Pirates' vaunted defense held Mt. Vernon Christian and opening-game opponent Curlew to 26 points, and Oakesdale to just 37.

The win over the Mt. Vernon Christian Hurricanes hinged on two things: a better job scoring by the Lady Pirates than the night before, and keeping the ball out of MVC high-scoring point guard Josie Droog's hands.

Maddy Dixon scored a game-high 22 points, reefed down 13 rebounds, made three steals and again sparked the team on the floor.

Sophomore Keely Maves also made a big contribution, scoring 10 and playing a crucial role inside, both offensively and defensively.

"They did a lot of good things tonight," Head Coach Tai Bye said. "They moved the ball well, we rebounded well, we shot a little bit better, but played loose tonight, played relaxed. Which, it's hard because you always play the 'what-could've-happened game,' but I'm proud of what they've done, and they get to bring home another trophy."

Bye credited Sydney Watko for sticking to the Hurricane's senior point guard Josie Droog, who averaged 14.8 points per game this season. She was held to 11 points and the defense forced a couple shot-clock violation turnovers.

"We knew we had to keep them stopped on defense," commented senior post Maddy Dixon, "and keep attacking, and last night we didn't get our shots to fall very well, and that was kind of a goal.

"We did a little bit better today," Dixon said. "Not all of them fell, but that happens, and we got some shots to fall, and just kept going at them the whole game and never let up."

The first quarter was tight and close, with Pomeroy finishing ahead 11-10. The Lady Pirates controlled the tip but both teams exchanged possessions for a minute and a half until Dixon's two free throws kicked off scoring. Sophia Wood hit a pair of gifters to knot it 2-2, but Dixon scored next, and Kailey Faber tied it again with a bucket, 4-4.

Alyssa Wolf gave a three pointer a try, missed, but Maves snagged the rebound and tried to put it back, got fouled, and hit both shots for a 6-4 lead.

On the other end, Maves fouled Wood, who split the pair at the line: score 6-5.

Dixon took a feed from Sydney Watko, made her spin move and scored. Hurricane Faber drove the baseline for an 8-7 score.

The Lady Pirates took command in the second quarter, outscoring MVC 11-6 for a slim six-point lead at the break.

Maves popped in a basket, and was fouled by Abby Russell. The and-one caromed out but a minute later, Dixon scored, got fouled, and added the gifter: 16-10.

The six-point lead melted with a J. Droog trey, but Dixon grew it back to five points with a key drive, pull-up and spin move for an 18-13 Pirate lead.

The rest of the quarter both teams struggled to score. Maya Kowatsch hit one of two free throws and three minutes later, Dixon took her spin move inside again for a bucket and a 21-14 lead. Heidi Heytvelt was fouled by Kylee Russell, shooting a double bonus, but hitting only one.

The Lady Pirates vaulted off the slight lead built in the first half with a 13-point run in the third quarter, all while holding the Hurricanes to zero, except for two J. Droog free throws at :41.

The third quarter started with Dixon puting back a Heytvelt miss, then Sydney Watko sank a pair of free throws after two minutes of back-and-forth possessions.

Dixon drove the baseline then dished to Maves for two.

The defense held MVC without shooting, getting the ball on the shot-clock violation.

Sydney Watko drove the key and banked one in off the glass, then Emma Severs zeroed in and knocked down a three for a 33-16 lead.

Wolf lofted a three, it missed, but Maves grabbed the rebound and put it back with a minute remaining: 35-16. Josie Droog was fouled by Maves, and she hit both gifters, ending the third with Pomeroy leading 35-18.

The fourth quarter was another string of Lady Pirate buckets as the Pomeroy defense put question of the game's outcome to rest.

The Hurricanes threw on a press, but crisp passing moved the ball into scoring position with McKenzie Watko feeding an assist to Dixon for two points.

MVC's Emma Droog hit a pair of free throws on a Wolf foul, but that was it for MVC scoring for the next four minutes. Dixon lined up and lofted a three which bounced up off the rim, lazily looped over to the other side of the rim, went up juuuuust enough and dropped straight down through the hoop.

Next time up the floor, Heytvelt pushed a pass into Maves who shot and missed, rebounded the miss and put it up for two.

Pomeroy again held the 'Canes and Heytvelt took a clearing on the baseline in and put up one of her trademark soft, one-handed push jump shots, knees curled under, and a 44-20 lead.

Severs attacked the key, put up a shot, missed and put back the rebound to end a 9-0 run.

MVC's Wood scored two free throws, but Dixon took her spin move inside again with about a minute and a half remaining.

After that, Bye subbed her bench in to finish the game and MVC scored two buckets in the last minute or so. 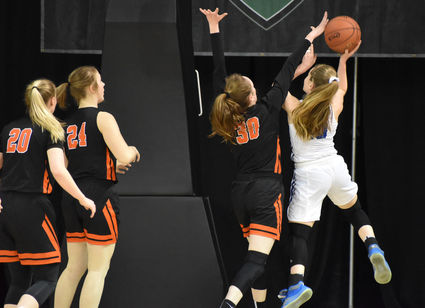 Lady Pirate Maddy Dixon (30) rejects a move to the bucket by a Lady Hurricane in action from the Lady Pirates' final game at the 2020 Hardwood Classic Saturday. Dixon logged a double-double, scoring 22 and snaring 13 rebounds. Ready to help are teammates Sydney Watko (20) and Keely Maves (24).