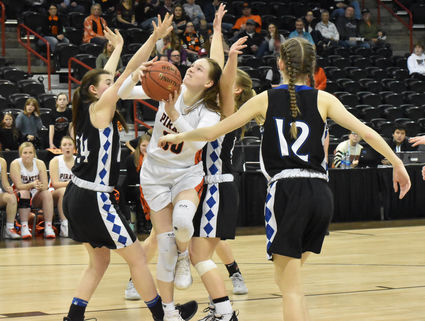 Maddy Dixon kept her eyes on the goal and scored a game-high 16 points, despite being double teamed by Oakesdale.

Oakesdale double-teamed Maddy Dixon, holding her to 16 points, still the game's high scorer, but the Lady Pirates' shots were just a tetch off the entire game, and the aggressive Lady Nighthawks managed to stay just an inch ahead, even to the last. Dixon finished with eight rebounds and two blocked shots.

"When you can't finish shots, you can't win a game," said Head Coach Tai Bye after the difficult defeat.

"I mean, I've got the best defensive team in the state, I absolutely do," she said, "because nobody's scored over 45 points on us the entire year. Teams that score seventy or eighty points score 35 on us.

"Defense can only take you so far," Bye said. "I'm a believer in defense. That's what I teach my girls. It's what's important to us, but when you can't finish a shot, you can't win a game.

Dixon dished an assist to Keely Maves for a bucket at 1:05 to play, pulling the Lady Pirates within one point, 35-34. The Lady Pirates got the ball back when Lizzy Perry's desperation shot clanked as the shot clock expired with :32 to play.

Pomeroy took two time outs to plan its final strategy, but the shot missed and Dixon, Sydney Watko and a couple Lady Nighthawks got tangled up for a jump ball on the rebound, with the arrow in Oakesdale's direction.

Pomeroy got the ball back, but Sydney Watko's twisting jumper in the key banged away, and Perry was fouled on the rebound. She made both of the one-and-one with 5.5 seconds to play, giving the Lady Nighthawks its 37-34 lead-and the game's final score.

Inbounding the ball, Heidi Heytvelt hucked the ball to Sydney Watko at half court, and Watko was fouled, landing hard on the maple.

She missed the front end of the one-and-one and again four rebounders came down with the pumpkin, this time the jump ball going to the Lady Pirates, with a scant 3.3 seconds to play.

Bye called a time out, diagrammed the last play, and the ball was inbounded, fired around the horn to Emma Severs, whose deep baseline three ball from the left side missed at the buzzer.

Oakesdale stayed a point ahead of the Lady Pirates each quarter, winning the first quarter 8-7, the second quarter 6-5 and the third 13-12. Those three points were the difference in the game as both teams scored 10 in the final stanza.

Keely Maves provided an effective counterpoint for Dixon, whose hands were full with two defenders on her. Maves came off the bench and took open shots, sometimes getting fouled, and going to the free throw line, as happened in the first quarter.

In the third period, Maves put up a bucket on an inbounds play and she got a couple more free throw tries in the fourth-plus two crucial baskets. At 2:38 in the fourth, Maves stepped to the line for two foul shots, missed both, but rebounded the second miss and put it back for two. She snagged six rebounds and made two steals.

Coach Bye acknowledges Saturday's game will be difficult. "But, I talked to my girls a lot about basketball's not just basketball; it's about life and sometimes in life you lose by three points," Bye said. "It is what it is. You pick your head up and you move on, And you go play for a different trophy.

"We talked about your season, and who you are, and what you're capable of isn't defined by a scoreboard," Bye said of the post-game talk in the lockerroom. "Never has been; never will be. These girls know defeat; they know loss, but our journey has been something that Pomeroy Girls' Basketball has never done. Ever. In 100 years. And that's something that they can never take away from us."