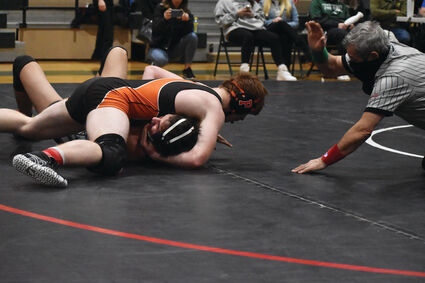 In the 182-lb division, Pirate Braedyn White had Greg Rainer of Chewelah pinned as the official's hand is raised to slap the mat. White was on the top of the division bracket, and 182-lb. teammate Curtis Winona was on the bottom–and they met in the championship match with White finishing first, Winona in second.

COLBERT–Pirate wrestling went away from the Crusader Classic here last Saturday with a pair of firsts, two seconds and a third, with the unusual occurrence of two teammates–Braedyn White and Curtis Winona–going head-to-head for the championship of the 182-lb division. The Pirate team finished fifth out of 13 teams competing in the tournament.