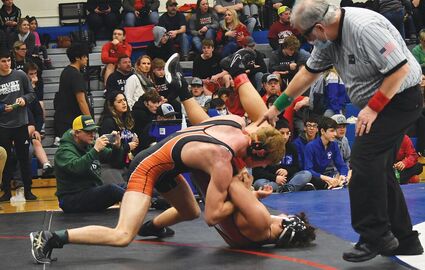 Pirate Curtis Winona had his hands full with his first opponent, Miguel Farias of River View, losing by decision, and worked his way through the consolation bracket, meeting Farias again and winning by decision, eventually finishing on the podium with a berth at State.

WARDEN–Pirate wrestlers Curtis Winona and Braedyn White both finished fourth in their weight classes at the 1B/2B Region 2 tournament in Warden last Saturday to advance to the state wrestling tournament in Tacoma this week. Sophomore Walker Flynn finished the day with two losses and plans to return next year.

"The Pirate wrestlers faced their toughest competition of the year," commented Head...