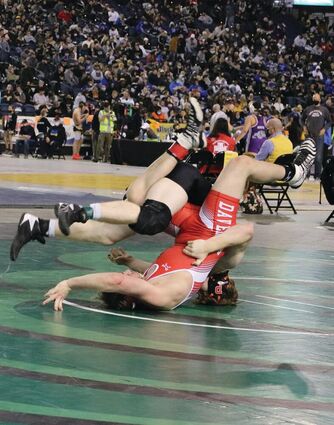 Senior Braedyn White put this spectacular move on Davenport wrestler Sam Schneider in his third match of the state tournament. Earlier, White won a match against Marcus Beck of Kalama by technical fall (16-0) and lost the opening match to the eventual state champion. White finished his high-school wrestling career one place away from a podium appearance.

TACOMA–Pomeroy High School's pair of wrestlers who competed in the 33rd WIAA Mat Classic here last week finished with identical 1-2 marks and were just one place short of finishing in the top four and reaching the podium.

"They wrestled their guts out against some stiff competition but came up short of the podium," commented Head Coach Ben Slaybaugh.