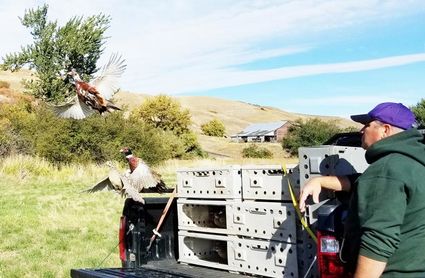 Jason Earl, with the Washington State Department of Fish and Wildlife, participates in the pheasant release at one of many release points in Garfield County as part of the joint project with the County.

POMEROY-The Garfield County Pheasant Release Project, spearheaded by Grant Morgan, Director of Public Works for the County, has begun its second year of providing young pheasants to repopulate the county, with the help of the Washington State Department of Fish and Wildlife (WDFW).

The first release for this year began September 21, 2019, and included about 450 male and female pheasants. The birds were released in various locations throughout the county, specifically near sites with public access and suitable habitat. The hope is that some hens will stay over winter and reproduce in the spring.

The chicks come from the Bob Oke Game Farm in Centralia, Wash., and were taken right out of the incubator at one day old. At that point, they were transported to Garfield County where they were cared for until maturity at three months old. The game farm also supplies pheasants to other release programs throughout the state. The release programs have the goal of ending the population shortage of pheasants in the state caused by environmental factors that have limited their preferred habitats of tall grasslands and shrubs.

The newly released birds spent six weeks in a brooder house, and then were banded and moved to a 100 by 300-foot flight pen. While growing to maturity, they have access to an automated water and feed supply, and are cared for by representatives of the WDFW, volunteers, and employees of Garfield County Public Works.

Morgan said that the group has learned a great deal through the experiences of the first year of the project, and they continue to look for ways to improve the process. They especially want to reduce the amount of human contact with the birds so they remain independent and keep their natural fear of humans. That way they can more easily survive in the wild. He believes they have come up with an improved system for raising and handling them to accomplish that goal. To date, Morgan estimates that probably less than two percent of pheasants released last year survived to this year, but if natural breeding can get started, he said that number would significantly increase over time.

The Pheasant Release Project is a joint effort between the WDFW and Garfield County, with the birds and some of the feed being donated by WDFW, and Garfield County supplying feed, care and housing for the birds. The County costs were paid for through economic development funds with the goal of boosting the local recreational hunting economy, while assisting in wildlife and habitat conservation. Morgan reported that there has been a lot of interest from local and out of town hunters, and that the WDFW is very interested to see how the Garfield County project "evolves."

The release locations in the county for this year included the vicinity of Linville and Tatman Mountain Roads, Bell Plain and Eureka Roads, Heaton Gulch, Hastings Hill Road near the Corps of Engineer's land, Upper Deadman Road, and Gould City and South Deadman Creek Roads.

Thoughts for improvements for the program for next year include possibly constructing more containment structures at various locations around the county to make releases easier, go more smoothly, and require less transportation for a better "hands-off" strategy, as well as possibly releasing the birds at five to seven weeks old, which eliminates the need for an outdoor flight pen, and would reduce the cost of feed needed to maintain them for three months. Morgan said that some projects around the state are having great success with earlier release times.

The County is actively seeking grants and sponsors to help with feed costs. According to Morgan, anyone can become a sponsor or volunteer. "We have a pretty good group of volunteers and WDFW staff" working with the program now. "However, our greatest cost and need is bird feed." To help with the project, call Garfield County Public Works at 509-843-1301.