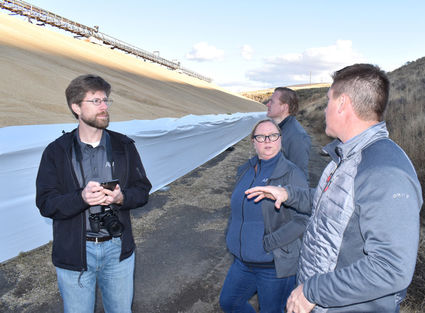 POMEROY–Pomeroy Grain Growers' Central Ferry Elevator was one stop during the Association of Washington Business's Manufacturing Tour of the state on Wednesday, October 9. The tour, which included stops in Spokane, Pullman, Clarkston and Garfield County, sought to bring the public's attention to the innovative employers and groundbreaking research that support eastern Washington's economy.

At Central Ferry, the entourage learned that the terminal handles 14- to 15-million bushel of soft white wheat annually, according to General Manager Derek Teal. The group got an up-close look at the 1.8-million-bushel ground pile, which was slated to be tarped this week.

In addition to the on-ground storage, there is 2.6-million bushel of upright storage at Central Ferry. The facility ships 12 months of the year, Teal told the group, depending upon the growers' sell orders and market dynamics. Each barge carries about 135,000 bushel of wheat from the terminal to Portland, Ore., primarily for export. 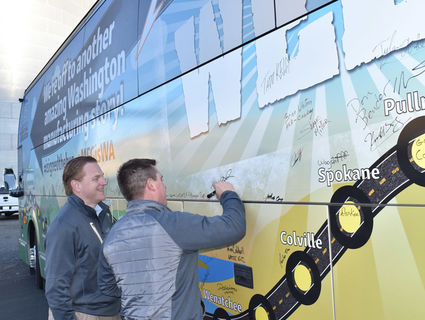 Next stop was Pullman and Washington State University's Composite Materials and Engineering Center where scientists are developing new building materials and fuels from a variety of resources, as well as new structural systems. Rigorous testing ensures that these innovations are efficient, economically viable, and safe. WSU President Kirk Schulz and faculty met with AWB staff and signed the bus in addition to the tour.

The tour highlights the nearly $59 billion in economic output and more than 287,000 good-paying jobs of Washington's manufacturing sector.

"AWB's Manufacturing Week bus tour is a celebration of Washington's incredible manufacturing sector," AWB President Kris Johnson said. "Manufacturing means good jobs, great products and a solid foundation for the economic health of our state. We're proud to represent such extraordinary employers, from thousands of family businesses - many of them starting in a garage or basement - to some of the world's biggest companies."