Fish and Wildlife looking to purchase 720 acres in Garfield County 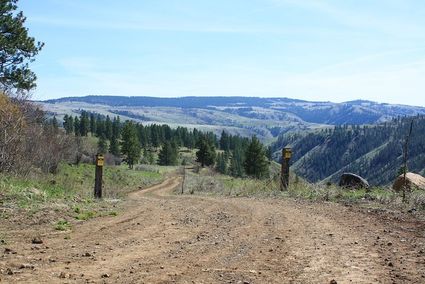 GARFIELD COUNTY–Grouse Flats is a rare geographical 720-acre local flat land area in the Blue Mountains. The Washington State Fish and Wildlife Department is pursuing the opportunity to purchase the privately-owned ground speculating they will better manage the wildlife and fires in and around that area.

POMEROY-Steve Pozzanghera, Regional 1 Director with the Washington State Department of Fish and Wildlife (WDFW), met with the Garfield County Commissioners on October 15, to discuss the potential purchase of 720 acres in the Grouse Flats Addition in Garfield County to be used for habitat and conservation purposes. The property being considered would be potentially part of the Chief Joseph Wildlife Area. The land is under private ownership currently, which includes two separate owners who are offering it for sale. There are no roads through the property or permanent residences located on the sites, but there are about a dozen small buildings in poor condition that would need to be removed when purchased.

Pozzanghera presented the commissioners with a copy of the Lands 20/20 Project Application, which summarizes the project and describes the property. The Grouse Flats area has been known as an area "rich in wildlife, heavily used by elk, deer, bears, cougars, and wolves" and other species of animals. The habitat there is made up of grass pastures, meadows, ponds, and ponderosa pine forests. The 720 acres are bounded on the north and the east by National Forest land and property that is already owned by the WDFW. To the west and northwest is designated Wilderness. It is considered to be a unique property because of the large area of flat land, at mid-elevation, which is rare in the Blue Mountains.

The purpose of the purchase by the WDFW is for protection of the habitat for wildlife and to increase the recreational opportunities in this part of eastern Washington. The source of funds for the purchase is the Washington Wildlife Recreation Program (WWRP), which has been set up by the state as a way to acquire valuable recreation and habitat lands before they are lost to other uses such as subdivisions for cabin lots. The belief is that the current level of development is beginning to impact wildlife populations. Currently, the property serves as habitat predominantly in the spring, summer and fall, and with climate change could also include winter, for many species. There are "numerous springs, wetlands, and Bear Creek on the property," and the WDFW believes the quality of the habitat will improve with management as a public-owned property.

During mild winters, deer and elk heavily use the property during the winter, and the location will be popular for hunting access for big game species. Camping could also be a popular use of the property. "Currently, the land is a working livestock operation for three to five months of the year." If purchased by WDFW, future "grazing would need to be evaluated prior to implementing."

Financial opportunities are described as "forest management activities (that) will be necessary to help the stands on the property move towards the desired goal of late-successional forests. Some of these management activities will generate revenue through the sale of timber. The property is high quality elk habitat, qualifying it for cost share grants with the Rocky Mountain Elk Foundation for doing habitat improvement. This type of work usually includes private contractors who will return their proceeds to the local economy through trickledown economics."

Pozzanghera explained that each year each region in the state is considered for any possible land acquisition projects. The consideration of this site is based on the landowners' requests. He assured the commissioners that the WDFW is not soliciting for purchases, and that they are very strategic in their choices for potential acquisitions. He also stated that the WDFW is aware that such purchases are controversial because of the concern that "state-owned land takes it off the books for taxes." However, the WDFW makes payments in lieu of taxes (PILT) on sites greater than 100 acres.

Commissioner Bob Johnson asked what rights does the County have to oppose the proposed acquisition of this Garfield County property. Pozzanghera replied that it is a "private property rights issue." However, the WDFW wants to maintain goodwill with the County, and would have difficulty moving forward if the commissioners opposed it.

The next step in the proposed acquisition process would be to have a public input opportunity through the WDFW's website. There would be a short narrative and maps on the website, and the public would have the ability to post their opinion on the site. The opportunity for public input would probably begin in December and January.

Pozzanghera added that the WDFW would like to keep the land in operation as desired by the County, such as with the allowed grazing of cattle for a portion of the year. He also stated that hunting on the property would most likely be allowed as open access during hunting seasons, with a permit-only season for elk hunting. This, however, would have to be approved after input from the WDFW biologist.

A concern from Commissioner Justin Dixon was that the population of deer and elk have been severely reduced in this area, and he doesn't see that the purchase by the WDFW is of benefit to the public. He also stated that if a private purchaser wants to purchase the land, the WDFW should not be involved, or even make an offer on the property, adding that it should be made available on the open market.

Pozzanghera responded that land that is not in public control, and is not managed properly, is more subject to fires. Dixon countered that there are "very bad negatives that we see at the local level. Fences are not provided, and it creates conflict between local (WDFW) staff and adjoining landowners." He would first like to see a proposal from the WDFW for 10 years of management.

The proposed site is adjacent to Asotin County, where a different property is being offered for sale. Pozzanghera will also be discussing that purchase with the Asotin County Commissioners.