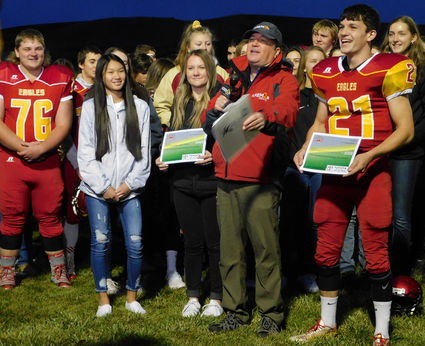 Centered between two of St. John-Endicott-LaCrosse Football Players, Katie Boyer, ASB Secretary (left), and Olivia Meyers, ASB President (center), accepted a check on behalf of the Pomeroy High School ASB for $222 from Tom Sherry, Chief Meteorologist for KREM 2 News (right). On the far right, SJEL football player and ASB President, Dylan Anderson, also received a check for $222 for his school. The awards were featured on the 5 p.m. and 6 p.m. news broadcasts just prior to the game on Friday night, October 18, 2019, played at the St. John football field. This was the last tailgate visit for Sherry for this football season. Each week during the season the KREM 2 news selects two local football game match- ups for the students, parents and fans to vote for which game Sherry should visit that Friday. The choices for the week were the Chewelah vs Kettle Falls game, and the St. John-Endicott-LaCrosse vs Pomeroy game. The votes were split 49.3% to 50.7%. Toyota is the sponsor for the cash awards. Both ASB Presidents represented said the funds would be used for sports activities at the respective schools.