Seniors on the Go 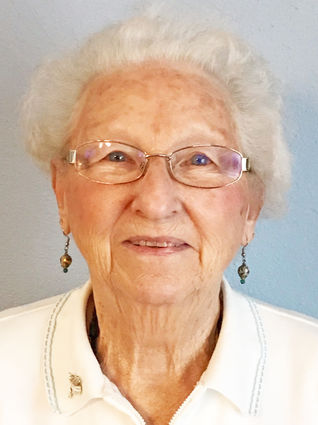 How does a girl born, raised and educated in the Midwest end up spending most of her ninety years in Garfield County? Simple! She followed her husband and her heart. Orleatha Gasseling was born in the small town of Alliance, Neb., on June 8, 1929, to Joe and Alice Halbur. She was an only child and went to a nearby country school until she was in the sixth grade. When her father quit farming and moved to Denver to become a barber, Orleatha finished her elementary schooling there and then graduated from Cathedral High School.

She participated in choir while in high school and sang at her own high school graduation. She was also a member of the cast of "LaBoheme" and was one of twelve young ladies running out on the stage asking about their children. The show played for three nights at the Denver Auditorium. This experience contributed to her singing in the Holy Rosary choir for twenty-three years.

The summer after graduating, Orleatha returned to Alliance to visit and it was there that her cousins introduced her to Kenny Gasseling. She returned to Denver in the fall and attended business school where most of the education involved learning to use calculators. She spent a year working for US Bank and then took a summer off to spend back in Nebraska to "test her feelings for Kenny!" At summer's conclusion, she returned to Denver to work for Montgomery Ward, but she and Kenny soon decided "this was it" and were married in 1950 in Denver. They returned to Nebraska after the wedding and worked there for six years on the farm where Kenny was employed. Their three children were all born in Nebraska.

Orleatha's grandparents, Roy and Grace Hazard, were living in the house in Pomeroy in which Orleatha currently lives. Her parents had moved to Portland from Denver. Returning to Pomeroy from a visit with Kenny and Orleatha, Orleatha's grandmother called and said Brown and Sons were looking for farm help. Orleatha called her parents and asked if she and Kenny moved to Pomeroy would her parents remain in Portland and not move back to the Midwest? Her parents said yes. That was all Kenny needed. He packed up the young family and they headed to Pomeroy, sight unseen to begin the next thirteen years of their lives working for Brown and Sons. Their youngest child was a month old as they traveled half way across the United States to their new home and life.

They spent their first Thanksgiving in Garfield County in the home where Orleatha now lives. They lived right across the street for six months as a house was being built for them on the Brown property. Kenny rode out to work on the school bus driven by Jack Peasley, grandfather of Pomeroy's present Jack Peasley. When the Browns sold their land to WSU, Kenny was asked to stay on and manage the WSU Experimental Farm. He readily agreed and thus began another chapter in their lives.

Even though Kenny and Orleatha lived twentyseven miles from town, they enjoyed lots of fun times with friends and neighbors. They bowled in a late-night bowling league with Larry and Jimmy Brown. Putting the kids in their jammies, they would have nearby Sheila Brown babysit and off went the parents to bowl.

On Sundays, they enjoyed picnics with Wayne and Barbara Brown, Don and Ethel Stallcop, Bobbie and Elton Brown and Doris and Duane Burns. The men would golf, the kids would swim, the women would visit and everyone had plenty to eat. If there was a show at the Seeley, they wanted to see, they would often stay in town long enough to take in the show. Once they moved to town, Kenny and Orleatha played pinochle on Sunday nights with Hazen and Jennie Odell and Bob and Ann Heitstuman.

Orleatha has been a life-long seamstress. She began to sew in earnest around the age of ten. It was then, however, that she put a needle through her finger using a treadle machine and her mother didn't know whether to go backwards or forward. She has made many of her own clothes; made a suit for Kenny; made her daughter Debra's wedding dress; made sports jackets for her sons as well as sewing for many of the parish priests, Sylvia Sillonis, Jimmy Brown, and many others in the community.

Living twenty-seven miles from town was peace-filled but had its drawbacks. The kids all had to choose just one extra-curricular activity, as it was just too far to drive in every night after school to pick them up from practice. It was also a long way from the doctor. Kenny lost a finger in a saw accident; Gary had a ruptured appendix after flu settled there; and other farm and kid accidents required a lengthy, scary trip for medical help. A perk the family did enjoy was stopping at Bagby's after church. They would indulge in either ice cream or Fig Newtons for the long trip back out to the Snake River.

In retirement Kenny and Orleatha did a lot of woodwork. Together they made a triple chest of drawers for their sons, a writing desk, a dining room set for each child as they married, a wooden clock, end tables, a TV console, and weather-vanes to name a few. They moved to Orleatha's grandparents' home in town in 1991. Kenny, her husband of forty-six years, passed away in 1996 and Orleatha has continued living in the same home ever since.

Orleatha enjoys the activities at the Senior Center and participates in the Tuesday-Thursday pie and sandwich bars. She occasionally subs for the pinochle players and, while at home, spends a lot of time crocheting, watching police movies or rooting for Gonzaga. She recently had a pacemaker put in which gave her a "new lease on life."

She commented one of the biggest changes in her ninety-plus years is the speed and types of communication, close-by and worldwide. With the help of her five grandchildren she has kept up with the changing times. She also has eight and a half great grandchildren, and though they all live too far away to be a part of her everyday life, but she sees them as often as possible. She is a faith-filled communicant of Holy Rosary Parish.