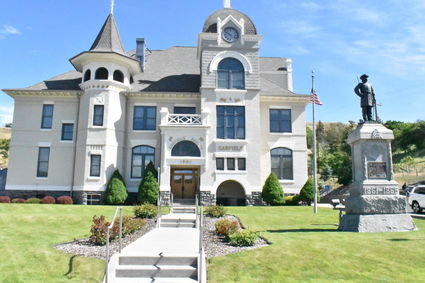 POMEROY-At the first Garfield County Commissioners Meeting for November 4, 2019, most issues discussed centered around budgeting for 2020, including pay increases, and consideration of expenses for the new year.

The County Employees Group for 2020 Wages and Benefits agreement was approved by group representatives and the commissioners at the October 28, 2019 meeting, then signed November 4.

Rachel Anderson, Director of Aging and Long-Term Care (ALTC), submitted 2020 budget information, a summary of her positions regular duties and additional responsibilities supporting her request for a pay increase. According to Donna Deal, Garfield County Auditor, to increase her salary to the level she is asking would require creating a new position and that Anderson's position is also paid by the Garfield County Transportation Authority. No decision has been made.

Grant Morgan, Garfield County Director of Public Works, asked the commissioners to consider an updated job description for Holly McConnell to fit her increased duties which will include an elevation in job level status with the appropriate pay increase. No decision has been made.

John Hirsch, Garfield County Emergency Services Director, requested to be a part-time County employee rather than a contractor with the County. He was unable to attend the meeting on November 4 to discuss the matter further, but the commissioners did spend some time discussing it. Hirsch is currently paid through the County from grant funds. A part-time County employee, working 25 to 29 hours per week, would make him eligible for County benefits. However, insurance benefits would be paid at half the rate as a full-time employee. No decision has been made.

Paula Kessler, Supervisor of the Fairgrounds property, submitted a letter of resignation effective immediately along with the key as of October 31, 2019. Commissioner Justin Dixon stated that until such time as a replacement can be hired, other county maintenance staff will be needed to fill in. Lisbeth Randall is currently handling any rent payments for the RV spaces, buildings and facilities uses. Dave Watko, who handles the courthouse maintenance, will also be assisting in maintenance at the fairgrounds. No events are currently scheduled there for the fall and winter months, and there is only one full-time RV resident currently at the fairgrounds. The commissioners decided that a meeting is needed with the Fair Board President and the Ag Museum President to establish some guidelines for what is needed to maintain the fairgrounds and who would be best to fill the position of grounds supervisor. That meeting will be set and announced as an open public meeting.

The commissioners approved and signed a resolution regarding the County provided health insurance benefits to change the policy that applies to married couples who each are eligible for insurance coverage through the County. The way the policy has been implemented, it allowed for some spouses to profit from duplicate coverage. The new resolution will require each spouse to keep their insurance benefits separately, which will prevent anyone from profiting at the County's increased expense.

As part of preliminary budget discussions, Morgan presented the commissioners an updated inventory of County Roads equipment and vehicles, and a tentative replacement schedule for the next four to five years. The last time a fleet analysis to track equipment was made was in 2007. The inventory set new values on the vehicles and equipment, taking into consideration depreciation rates and increased rental rate values for 2020. These new values will help set the budgets for the new year.

Morgan spent a significant amount of time this past year in dealing with the issue of getting water to the east end of town for new development in that area. It was a struggle, and he using a special attorney with expertise in water issues would have saved him time. He asked the commissioners to approve setting up a special account with budgeted money to pay for a special attorney to use for special projects, such as permitting questions. Commissioner Dixon asked Morgan to come up with a plan, and they would discuss it with County Attorney, Matt Newburg.

The proposed Road Usage Charge (RUC) that the Washington State Legislature is promoting, is a new tax to replace the collection of fuel tax at the pump. The RUC would be collected from each individual driver based on the number of miles traveled on Washington roads. Morgan wants to fight this legislation and wants to promote a 1.08% sales tax addition to take its place. To implement the RUC would cost more to manage than it would gain by collecting the tax. He also considers it as an infringement on individual privacy due to government tracking drivers' mileage use data. He asked the commissioners to consider putting together a letter supporting his proposal, as well as attendance at some meetings regarding the proposed RUC.

A proposal from Jon van Vogt to install a walking pathway from the Pataha Flour Mill to the fairgrounds was discussed. Vogt would like to have an eight-foot wide, gravel pathway that would follow his fence line into the fairgrounds. The pathway would be large enough for a car or pick-up truck to drive through, but not used for that primary purpose.

Morgan discussed the project with Vogt and acknowledges a grant request, but the County would need to give permission for the pathway to connect into the fairground's property. If the County provided the construction of the pathway, it would take very little time, and would be at a minimal cost. Commissioner Dixon suggested that they seek public opinion of such a project. It was decided that a legal announcement for public input would be published, that would include a map drawing, before any decision would be made.

Commissioner Dixon requested a 15-minute executive session to discuss the performance of a county employee as well as other personnel issues.