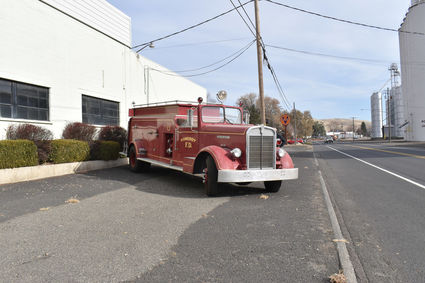 The fire trucks have been donated to the Garfield County Vintage Fire Truck Association by Ray Bowman from Littleton, Colo., who is the son of the late Fire Chief John Bowman. He purchased the trucks once they were no longer in commission and restored them. The association now has four retired fire trucks that served in Garfield County. Included in that collection are the 1927 Studebaker city truck, 1933 Mack city truck, and the recently donated vehicles, the 1948 International KB-8 brush truck and a 1948 Kenworth city truck. All four trucks now belong to the association.

POMEROY–The two fire trucks that Ray Bowman restored and now have returned to Garfield County were two Primary service rigs from the late 40s until the White International was retired in 1972 and then declared surplus and sold to Prescott. The City Pumper, a 1948 Kenworth, remained in service until 1989 when the City purchased a 1989 Ford Central Pumper.

When the Kenworth was declared surplus, Swede Herres purchased it and had it for a short time when Bowman expressed an interest in it and bought it. Bowman asked Chief Larry Bunch if he knew where the old IH KB-8 was located. He was told it was sitting outside the City of Prescott in pretty tough shape, but Bowman purchased it. It was then the restoration of this service vehicle began.

The Kenworth is a 750 GPM Pumper with a beast of an Engine for its day. It has a 779 cubic inch Waukesha Engine. The six–cylinder engine is a multi-fuel engine that was common during the War years. It has a battery distributor and a magneto ignition which results in two Spark Plugs per Cylinder. This Truck was only a City Truck designed to pump off of a hydrant.

The KB-8 International was a County truck before there was a Fire District and had a 406 cubic engine with a five–speed transmission and a three–speed auxiliary transmission. Only a few drivers were very comfortable driving this truck and it was only two–wheel drive; so, it was somewhat limited on Grain and wildland fires. This truck also had a mid-ship pump that allowed it to pump off of Hydrants in the City at a rate of 450 GPM.

The truck had a 800 gallon tank and a piston pump powered by a V-4 Wisconsin engine and it generated very high pressure for wildland fire fighting. It has a platform front Bumper where there was a hand nozzle and spray boom for pump and roll situations. A firefighter would stand on the bumper and fight the fire from that point. Firefighter had an asbestos suit that they wore to protect them from the heat. Yes, asbestos! It was before the dangers of this particular insulator were openly recognized. 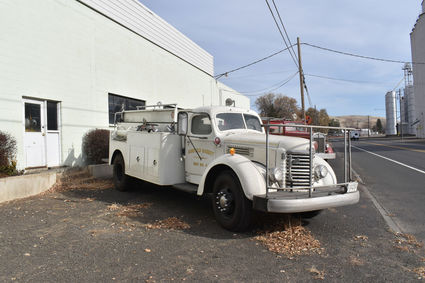 Another Firefighter would ride on top of the truck manning another nozzle and would often be called on to shoot water on the guy in the suit. Former Chief Bunch said that he was always glad that he stood 6' feet 6 inches tall and the suit did not fit.

Leslie Krouse was Fire Chief when the trucks were built in 48-49 and it was considered quite an improvement to the City and Counties Firefighting abilities. The current Fire Station was built in 1950 and these two trucks were featured sitting in front of the Station in a front–page East Washingtonian photo when the station was completed.

The Vintage Fire Truck Association board members are Donna McGee, Muriel Bott, Larry Bunch, Steve Krouse and Bryon Denny. Donations can be made to this non-profit organization at the Bank of Eastern Washington.