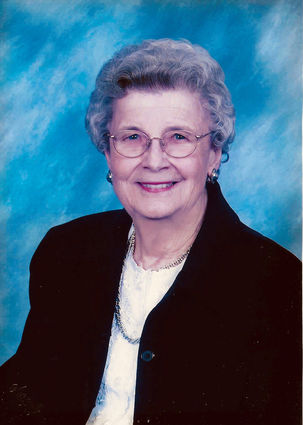 Marjorie was born to Herb and Ethel Beckley on November 10, 1921 and spent her childhood on a wheat farm in Benge, Wash. She graduated from Ritzville High School in 1939 and from Washington State University in 1943.

She married Ken Killingsworth from Pomeroy in 1943. After he served in World War II, they settled on the Benge family wheat farm. Marjorie was actively involved with the Benge Community Church and Benge Grange and guiding their four children in 4-H and school activities. She loved hunting pheasant in the wheat stubble with her black lab retriever.

In 1962, the family moved to Coulee City to raise cattle while Marjorie taught high school classes at a nearby town. Marge and Ken moved to Corvallis in 1968 to complete their Master's degrees at Oregon State University, later settling in Fossil, Ore. Marjorie was very active in the Fossil community.

She regularly attended the Methodist church, taught high school and was instrumental in the formation of a rural health clinic which is still in existence over 30 years later. Marjorie was known for her work ethic, high standards, love of her family and community involvement. Upon retirement Marge and Ken traveled extensively within the States, Europe, Australia and South America.

After her husband Ken passed away in 1999, Marjorie decided to move to Spokane to be closer to her children. She lived in Fairwood Retirement Village for ten years and then Fairwood Assisted Living for the past eight years.

She was preceded in death by her parents Herb and Ethel Beckley, her brother Carl Beckley, her husband Kenneth and her two sons Jim and Dale. She is survived by two daughters Shirley McLean (John) and Carol Killingsworth (Rick), daughter-in-law Carol Killingsworth, four grandchildren, Tammy Hossfeld, Ted McLean, Ruth Walker and Lance Rottger as well as six great-grandchildren.

Private burial was held at the Pomeroy City Cemetary. A public memorial service will be held at Fairwood Assistive Living at 312 W. Hastings Road, Spokane, Wash. on Saturday, December 7 at 2 p.m. Donations in remembrance may be made to your favorite charity.