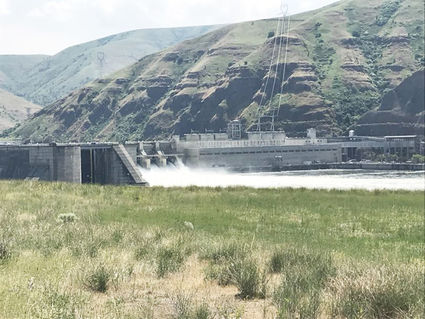 During the 2019 legislative session at Gov. Jay Inslee's request, $750,000 was included in the 2019-21 operating budget to study the possibility of breaching and removing the four lower Snake River dams, which includes Lower Granite Dam. Representatives Mary Dye (R-Pomeroy) and Joe Schmick (R-Colfax) both oppose the idea and ask local voters to contribute their voices to the Stakeholder Engagement Report comments.

"This report, and whatever public input is provided, could have a profound effect on the future of our lower Snake River dams," said Schmick, R-Colfax. "These dams provide essential electrical power generation to our state, irrigation for agriculture, recreation and tourism, and navigation for wheat and other agricultural products barged to seaports. Thousands of eastern Washington jobs depend on these dams staying in place."

"Removal of these dams would not only be detrimental to Washington state, but to the nation," said Dye, R-Pomeroy. They provide stability for the clean energy supply for 13 western states and Canada. The Columbia-Snake River system is the third largest grain export gateway in the world. Nearly 10 percent of all U.S. wheat exports move through the Snake River dams."

"Instead of fighting to remove dams, we should be investing in projects in the Puget Sound that directly help the orca, such as improving our wastewater treatment capacity," Dye added. "We have continuing growth in the Seattle area and on-going problems with wastewater and sewage spills into the Sound. This directly impacts the health and food supply for the orca."

During the 2019 legislative session at Gov. Jay Inslee's request, $750,000 was included in the 2019-21 operating budget to study the possibility of breaching and removing the four lower Snake River dams. In August, the governor's office hired a consulting team to begin the study. The 113-page draft report was released by the governor's office on Friday, Dec. 20.

Although the report does not make recommendations, it does include viewpoints from more than 100 local, state, federal, tribal officials and others in an effort to decide the next step in the future of the dams.

"A federal evaluation is nearing completion in February which involves the creation of an environmental impact statement (EIS) that could decide the future of these dams. We are concerned the governor may use his dam study as a way to influence the EIS process, which could have major repercussions in Eastern Washington," said Schmick. "That is why it is essential the public turn out to these workshops and show their support for retaining these dams."

The public workshops will include a short presentation of the report, followed by a panel discussion representing different interests. The governor's office is not allowing public testimony during the workshops. However, written comments will be accepted at the events and online until Jan. 24.

"This issue is too important to the well-being of our rural economies for citizens to be silenced. There's nothing more powerful than hearing public comments in a public forum. I find it unconscionable that forum organizers are unwilling to hear the voices of the people who are most deeply affected by calls to remove the dams," said Dye. "I highly encourage people to get to one of these meetings and submit their written comments. We must let the governor know where we stand on this issue."

The following are public workshop dates and locations: The first workshop is scheduled on January 7, in Clarkston, Wash., at the Quality Inn and Suites–Quay Convention Center, 700 Port Drive, at 6-9 p.m. The second is on January 9 in Vancouver, Wash., at the Washington State University Vancouver campus, Dengerink Administration Building (VDEN), 14204 N.E. Salmon Creek Ave. and the third workshop opportunity is January 13 in the Tri-Cities Red Lion Hotel and Conference Center, 2525 North 20th Ave, Pasco, Wash., at 6-9 p.m.