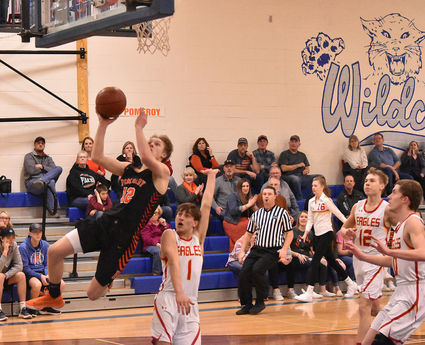 The Pirates soundly defeated SJEL Thursday night in Colton and will play No. 1 Garfield-Palouse Saturday at 4 p.m. in Palouse. Trent Gwinn (12) scored a game-high 24 points and, along with Danner Maves (not pictured), drained three three-pointers.

COLTON–The Pomeroy Pirates defeated St. John-Endicott-LaCrosse in a play-off game here Thursday 56-33 and will face the No. 1 Garfield-Palouse Vikings in the first round of the District 9 1B Tournament.

The Pirates were trailing 4-2 in the waning minutes of the first quarter when they went on a 20-2 run through the bottom of the first and first 4:30 of the second quarter, helped by three pointers by Evan Bartels, Danner Maves, Trent Gwinn and Maves again. The margin held the rest of the game.

Pomeroy was helped by chilly shooting by the Eagles. Everything from bunnies to three pointers were clanking out, and Pirate rebounders were usually on the receiving end, and the Eagles committed several unforced errors-traveling and carrying the ball-to give it up to Pomeroy. SJEL's big fella Kameron Greenhalgh was a force in the key, ending the night with 17 of SJEL's 33 points.

Pirate Gwinn was the game's scoring leader with 24, and he and Maves were hot from the arc, both nailing three treys.