Pirates bow out with loss to Tigers 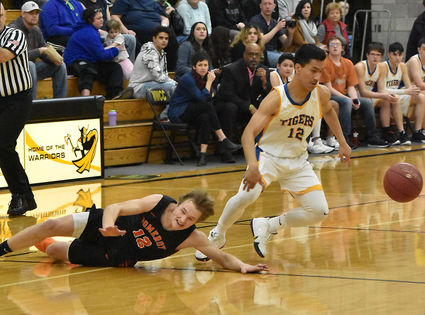 After Pirate sophomore Trent Gwinn (12) sprung the ball loose from Prescott's Jon Cardenas (12), teammate Evan Bartels (not shown) gathered the loose ball and hustled to the bucket with Cardenas following behind. Gwinn led the Pirates with 20 points in the season-ending 53-41 loss to Prescott.

WALLA WALLA–After dropping last week's opening-round contest to Garfield-Palouse, the Pirates headed into the stormy waters of the consolation bracket, facing the Prescott Tigers in a loser-out game at WWCC here Friday and being sent home after letting a half time lead evaporate and losing 53-41.

The Pirates finished the season 5-7 in Southeast 1B play, 6-16 on the season. To reach the Distri...