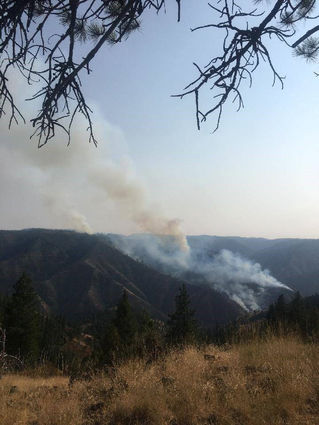 The Rattlesnake Fire is currently estimated at approximately 300-400 acres and is burning southward into the Tucannon Wilderness. Fire managers are currently developing a suppression strategy.

POMEROY–At the time of this writing, Monday night, August 24, the larger or more active fires in the Meacham Complex are the Horse Fire, the Hager Ridge Fire, the 896 Fire, and the Rattlesnake Fire.

The Rattlesnake Fire is burning on the Pomeroy Ranger District, approximately twenty miles south of Pomeroy and thirteen miles southeast of Dayton. Due to the distance of the Rattlesnake Fire from the other Meacham Complex fires, some IMT members will move closer to the fire–likely in or near Dayton.

The Rattlesnake Fire is currently estimated at approximately 300-400 acres and is burning southward into the Tucannon Wilderness. Fire managers are currently developing a suppression strategy. However, limited access (because of spring 2020 flooding) is hampering some efforts, and the local District is trying to complete temporary repairs to improve firefighter access to the fire.

Firefighters initiated suppression efforts Sunday afternoon, August 23, on the Rattlesnake Fire, located a quarter mile south of Panjab campground. A 12-person crew was transported to the fire via helicopter and began building containment lines along the southeastern edge of the fire. Two helicopters supported ground resources by dropping water on the fire to slow spread and cool hot spots.

The Rattlesnake Fire at that time was estimated at 250 acres and was burning upslope toward the south and southeast in between two steep ridges within the 2006 Columbia Complex fire scar. The fire is burning in grass, brush, snags and timber with dead and down trees. Fire was most active on the southeast and northwest edges of the fire.

Contractors with heavy equipment and local forest engineers completed repairs on the approach to the Little Tucannon Bridge on FSR 47 (which was damaged in the February flood event) and are now working on opening the road up to the Panjab campground. The objective of this work is to gain firefighter access into the fire. A 20-person crew had arrived and will hike in once access on FSR 47 has been restored.

The Northern Rockies Incident Management Team 3 that is managing the Meacham Complex took over command of the Rattlesnake Fire on Monday, August 24 at 6 a.m. The Forest will also implement a temporary road, trail and area closure surrounding the Rattlesnake Fire for public safety.

Hot and dry conditions are expected to persist throughout the week. Fire officials want to remind everyone that the current fire danger rating remains at HIGH and Public Use Restrictions involving chainsaw use are in effect.