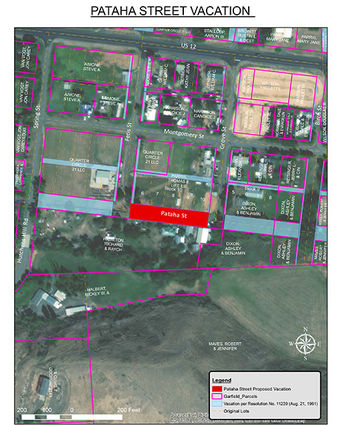 POMEROY–The public hearing for vacating portions of street and unincorporated town of Pataha, Resolution No. 2020-12, was opened to public comment on November 30 at 10 a.m. Garfield County Commissioner listened to the comments outlining the need for change in that area and reasons why, but tabled acting on the resolution after encountering multiple points of view and ideas, all presented with concern and civility.

Comments were made during the last portion of the public hearing defining reasons for the vacations and offering solutions to safety and area traffic issues.

Richard Hamilton, the original vacation petitioner, stressed child safety as the number one reason to modify traffic in and out of his residential area. He thought a gate would slow traffic enough to prevent an accident involving children.

Wayne Davis agreed protecting children in that area was of the utmost priority. Ashley Dixon said safety is in fact critical especially for larger vehicles such as Naslund garbage trucks, Fedex and UPS. Turning around is a problem, causing drivers to utilize private property as a turn-about.

Jim Nelson asked County Engineer Grant Morgan how traffic could be slowed or minimized. Morgan stated the county could put a 5-mile sign or "children at play" signs warning drivers. Neither would guarantee continuous safety.

Dixon concluded public safety is a factor and is first and foremost the greatest consideration. However, not all parties agree how to obtain that assurance. The Commission Chairman posed a task to the property owners to come up with a solution that will work for all involved, for the most part. In an effort to sort this issue out, property owners and the public have an opportunity to express ideas with the County Commissioners and County Engineer over the coming week. A decision may be made at the next Commissioners meeting.

Grant Morgan, Garfield County Engineer and Public Works Director, submitted and reviewed the County Engineer's Report on the Vacating of a portion of Pataha Street in the unincorporated town of Pataha, Wash., before community response. He will refer that portion historically known as Munch Road, here forward as Spring Street. He reads:

in Blocks 3 & 4, Pataha City, in the unincorporated town of Pataha, the Garfield County

1. I have examined the limits and surrounding area of the proposed vacation as well as I have

been in contact with the petitioners, adjacent property owners and affected utility companies.

2. Attached is a revised map showing the proposed limits of the vacation being considered at this

time? The map revision is agreeable to all parties involved.

3. The public will benefit by abandonment and vacation because it will limit unnecessary public

4. The benefit to the County, include returning the property to the tax rolls as well as eliminates

36.87.141, an easement shall be retained within the subject vacated area for the purpose of

constructing, repairing, and maintaining of public utilities and services.

6. It is my opinion that it is not necessary to preserve said roads for the county transportation

expand otherwise. Therefore, it is recommended that said portions of alleys and roads be

vacated and abandoned and be passed to the owners of record of the adjoining land, provided

permanent utility easements provisions are included as stated in bullet point number 5 above.

"This particular vacation," Morgan stipulated, "they are going to maintain the alleys-there is still a loop configuration, so there is access in there. We are not changing the nature of anything there as far as traffic patterns go. It is a real short jog about 100 feet from the road that the vacation begins."

Morgan continued the review of the County Engineer's Report on the Vacating of a Portion of Pataha Street in the unincorporated town of Pataha, Wash., which read:

Pursuant to Garfield County Commissioners' Resolution No. 2020-12 dated October 26, 2020, regarding the Board's intention to vacate a portion of Pataha Street in the unincorporated town of Pataha, the Garfield County Engineer hereby submits the following report:

1. I have examined the limits and surrounding area of the proposed vacation as well as I have been in contact with the petitioners, adjacent property owners and affected utility companies.

2. Attached Exhibit A is a map showing the proposed limits of the vacation being considered at this time.

3. Only 1 of the three adjacent property owners to Grove Street were in favor of vacating a portion of Grove

Street. Three of the four adjacent property owners are in favor of vacating that portion of Pataha Street. Refer to attached Exhibit B, Public Comments.

4. It is my opinion that the public will not benefit by the vacation of said roads in that it would likely restrict and/or limit current public use of the existing roadways, which are necessary to provide adequate ingress and egress to neighboring properties. If Pataha Street were vacated, historic traffic patterns with respect to ingress and egress would be adversely affected as a result creating a dead-end road with inadequate area necessary to make a legal turnaround/U-turn without encroaching upon and/or causing damage to private property. This issue is most prevalent at the Pataha and Grove Street intersection but is also a concern at the Pataha and Fettis Street intersection. Adjacent property owners have voiced these same concerns. There are also significant safety concerns with creating a situation where traffic in many cases would be forced to back out several hundred feet once they figure out, they cannot drive through as the can presently. As a result, the possibility of accidents due to backing become a significant factor in making this decision.

5. In addition to the engineering issues, I have also concluded that none of the adjacent property owners can reach a consensus. 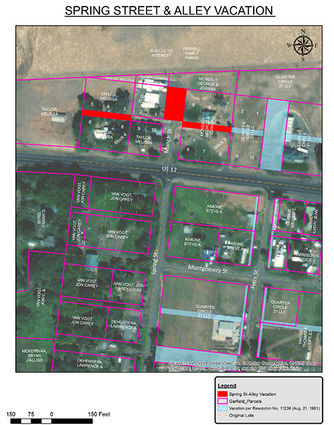 6. Based on the facts presented and my analysis, I recommend that this vacation request be "denied". As an alternative to vacating the roadways in question, I propose to develop an engineered solution to mitigate the traffic issues and pedestrian conflict issues of concern.

The analysis used to draw a conclusion was the County Road Standards, was to look at different scenarios of moving portions of Grove Street vacating it up closer to the intersection to Montgomery Street and according to Morgan, possibly creating a Cul-de-sac at the end of Fettis Street. "It looks like there is room to create a Cul-de-sac to get vehicles in and out of there, but because the other side, we're blocking that off, we would be blocking of the same distance off of Montgomery Street with no probable way of creating a cul-de-sac there. We would be in violation of our County Road Standards," continued Morgan. Cul-de-sacs need 50 feet.