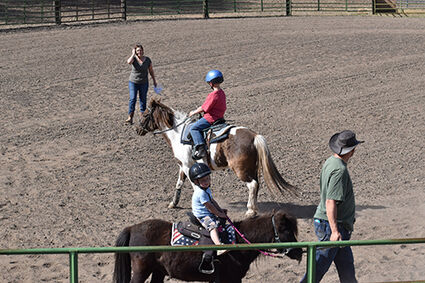 Alesia Ruchert, back left, calls Simon Says for two bothers Karl, center front. who took the game seriously while his brother Kevin Burnstad, front, enjoyed his time on his pony, led by his father Kyle Burnstad.

Over 25 people came to the Garfield County Fairgrounds to help and participate in the Pony Punchers' scavenger hunt. Three teams were formed–the Red/Orange team with Westelle and Sarah Scoggin; the Pink team with Sophie Miller, Sadie Klaveano, and Evelyn Burnstad; and the Gr...