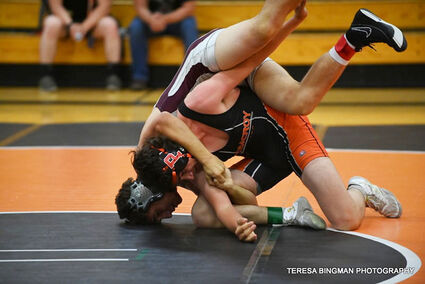 Walker Flynn pivots his opponent in the championship round, A. Chilsen of Reardan, on his way to winning both matches and top the 160 lb. class in the Southeast League.

POMEROY––Pirate wrestling had a successful meet last Saturday, taking the crown in one weight class and finishing second in three others.

The match included teams from Reardan, Colfax, Liberty, Lind-Ritzville, and Davenport, and it prepped the wrestlers for the final event of the season, a regional tournament this Friday, June 18, starting at 9 a.m. at Liberty High School in Spangle.