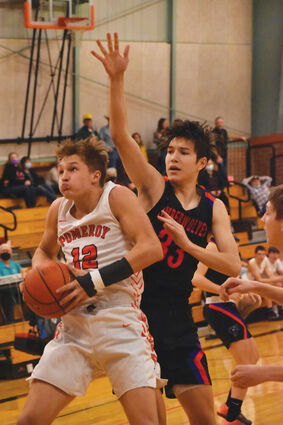 Senior forward Trent Gwinn (12) was back in the lineup against Tekoa-Rosalia and didn't disappoint, chalking up 30 points in his first game since an injury on December 18. Gwinn's energy lifted the Buccaneers when they needed it, especially in the fourth quarter when a nice lead evaporated...the Pirates eventually holding on for the 62-60 win. Defending Gwinn is TR's Isaac Bone.

POMEROY––Just when the Pomeroy Pirates would build a comfy lead, the Tekoa-Rosalia Timberwolves would creep back into the game, and when the nice, 10-point, fourth-quarter lead got pared down to just two points, the Pirates were able to hit clutch buckets and keep the T-wolves at bay. When the dust had settled, Pomeroy won the league counter 62-60.