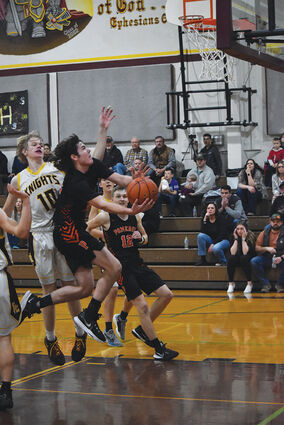 A home-court loss to Yakama Nation Tribal knocked the Pirates out of District contention Saturday. Junior Guard Trevin Kimble (22) hit a crucial fourth-quarter trey for the lead in the Yakama Nation game, some of his 15 against the Eagles. Also pictured, Trent Gwinn (12) scored his 1,000th career point with his last basket of that game, then added 19 in the loss to Yakama Nation. Gwinn's record is remarkable due to Pomeroy playing only eight games in the 2021 truncated season, and missing four this season due to a broken wrist.

POMEROY––A late fourth-quarter run put Pomeroy in front briefly, but Yakama Nation Tribal's top scorer Justice Hart swished a three to give the Eagles the lead, and the Pirates were unable to get it back, bowing out of the District Tournament with the close 52-45 home-court loss. In their first District game, the Pirates fell to Sunnyside Christian 60-40 on the Knights' home court Feb. 10,...