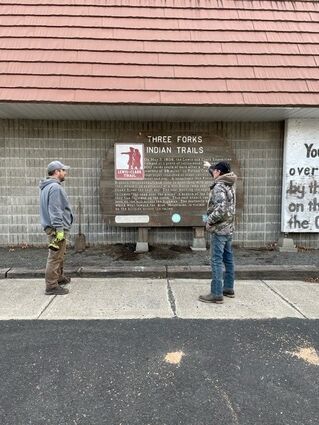 The Three Forks Indian Trails sign was put into place by Scott Laughery, left, and Terry John earlier this year. The sign was removed by the state and replaced by a new, state-approved marker, so Gary Cole saved this original sign, which now lives east of the Garfield County Museum entrance. Upper left: Mark Ledgerwood, on the forklift, maneuvers the cumbersome sign closer to its final position while, John, left, and Laughery, help guide. Upper right: John, Ledgerwood and Laughery wrestle the sign to reposition it prior to final placement. Lower right: Gary Cole supervises as the sign he saved is prepared for mounting in front of the Garfield County Museum.

POMEROY–The Three Forks Indian Trails sign now makes its home in front of the Garfield County Museum on Columbia Street. The crew of three placed it carefully on the east side of the entrance to the building, in view of passersby and visitors.