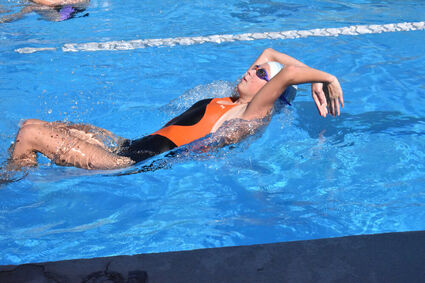 Pushing off the wall in the 50-yard Backstroke race, Carmen Fruh finished in first place. She also completes in several other categories in the Girls 13-14 age bracket placing first or second in her heats. The Pirate Swim Team story continues on page 2.

POMEROY–The Pirate Swim Team competed in two meets this week on Thursday July 21, placing third against Colfax and Pullman in a meet held at the Colfax pool, and took first place at the Tuesday, July 19, meet against Garfield-Palouse-Oakesdale-Plummer (GPOP) held here.

The Pomeroy Pirate team took third at the Colfax pool with a combined score of 347. Colfax placed first with a score of 494.5...