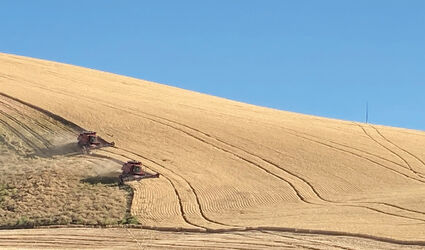 Wheat harvest is off and running in Garfield County. Week before last, Luke Ledgerwood's operation was captured by the East Washingtonian lens as it made the opening cut on a piece west of Dodge Junction on July 22. This has been an interesting year weatherwise for local small-grains producers, evidenced by the late start around the region. Rainfall in April, May and June was upwards of 200% above normal, but the upside is that yields and quality should make it an above-average year. The East Washingtonian's "Pomeroy, A Farming Community" Special Edition continues on page 4

Facing the country at this time are some heavy-laden factors that range from climate change, supply chain, taxes, and economic uncertainties. State and federal governments are pressing forward with their focus on climate change, mostly, while the rest of the country makes the best of the aftermath of the pandemic shutdowns and recovery.

The Climate Impacts Group, College of the Environment, at the University of Washington states that Washington State agriculture will experience some change due to the climate issue, because the area is so diverse.

"Washington State agriculture is projected to be affected by warming temperatures, rising carbon dioxide (CO2) concentrations, and changes in water availability," according to a 2013 paper, "Agriculture: Impacts, Adaptation, and Mitigation," by S. D. Eigenbrode, et al.

"Some changes may be beneficial while others may lead to losses–the consequences will be different for different crops and locations," the study indicated. "Ultimately, impacts will reflect a combination of all factors: warming, increasing CO2, changing precipitation and irrigation water supply, the specific changes in climate that will occur, and the extent and effectiveness of adaptive actions that are taken in anticipation of the effects of climate change."

The University of Washington College of the Environment study "How Will Climate Change Affect Agriculture in Washington?' hypothesizes, with the warming trends, growing seasons will increase and the winter freezing period will decline, resulting in unwanted pests, weeds, diseases and lower yields.

The study indicates with increasing CO2, there could be increased productivity in some crops.

"Increasing CO2 concentrations. Increasing levels of atmospheric CO2 may result in increased productivity in some crops (referred to as "CO2 fertilization"). In the near term, if sufficient water is available, these benefits can outweigh the negative effects of warming. Invasive species may benefit as well; some as a result may gain a competitive advantage over native species and crops."

The study continues to hypothesize that with wetter winters, it is expected spring soil will be too wet to plant early on and is then followed by drier, hotter summers, with less water for crops.

In addition, with drought-like conditions, evaporation will occur and streamflow would lessen, making it difficult to irrigate in some areas.

Pests, which the study limited to the Codling moth, leaf beetle and parasitic wasp, are expected to increase due to warming trends. This is expected to change depending on the crop and other factors.

The impact on livestock in response to heat stress, according to one study, Cattle "...are less efficient at converting feed into protein (either dairy or meat), and have reduced reproductive rates. Dairy cows in Washington are projected to produce slightly less milk in response to heat stress–about −1% less by the 2080s (2070-2099, relative to 1970-1999) for a medium greenhouse-gas scenario. Preliminary results project that beef cattle will mature more slowly, taking +2.2 to +2.5% longer to achieve finishing weights in response to a doubling of CO2, which is projected to occur by about mid-century under a high greenhouse gas scenario. (This information was from "Impacts of Climate Change on Dairy Production," by G. S. Mauger, et al., 2013. Potential Effects of Climate Change on Warm Season Voluntary Feed Intake and Associated Production of Confined Livestock in the United States. MS thesis, Kansas State University, Manhattan.)

Another issue causing changes in farming are problems getting product, paying for it, taxes, federal spending, legislation, and trade.

The first and most obvious problem is supply. It is reasoned the supply chain is the prime effect of the pandemic shut down of the country which, compromised the ability to move product from on destination to another; creating a bottleneck. It states in a recent AgAmerica Lending article, "Seven Factors Influencing the U.S. Farm Economy in 2022: "These bottlenecks have led to far-reaching impacts on farmer and ranchers such as making it difficult to find machinery parts and transport commodities. Supply chain shortages are a central contributor to inflation and spiking farm production costs."

Delays, shortages, bottlenecks and lack of product such as fertilizer, fuel and oil, feed and getting product to market contribute to the "catch-22" effect of higher prices to produce, higher prices to sell, higher prices to access–lather, rinse and repeat. This circular economic motion will eventually spiral into a recession, minimizing demand and an uptick in inflation. It's a vicious cycle.

"If the inflation we have seen this fall, running well above the 2% target, becomes embedded in expectations for the economy, the Federal Reserve may choose to start raising interest rates during 2022. Remember the multi-year inflation of the 1970s that ended with very high interest rates and a farm financial crisis as assets were re-valued in the early 1980s? The situation is not at that level, but farmers and ranchers need to carefully consider their risk management strategies as they move through 2022," an article stated in the Western Farmer-Stockman; "U.S. economic outlook and agricultural implications of 2022., Jan. 3, 2022.

Not only does farmers face inflation, Washington State climate change taxes pose additional concern for fuel use. Recently, Washington state passed the new carbon tax with will impose an additional 46 cent per gallon of fuel at the pump. Presently, the state tax is 50 cents per gallon. "Washington state's new tax on carbon dioxide emissions under the Climate Commitment Act (SB5126) is projected to add 46 cents per gallon to the cost of gas next year, nearly doubling the amount of taxes Washingtonians will pay at the pump. The current state gas tax is nearly 50 cents per gallon," according to Brett Davis "Washington gas taxes to nearly double next year under carbon program, The Center Square, July 12, 2022.

Farming's future will be determined on the reality of this economic stress. According to the New York Times, "U.S. Economy Shows Another Decline, Fanning Recession Fears," "A key measure of economic output fell for the second straight quarter, raising fears that the United States could be entering a recession-or perhaps that one had already begun...Gross domestic product, adjusted for inflation, fell 0.2 percent in the second quarter, the Commerce Department said Thursday of last week. That drop followed a decline of 0.4 percent in the first quarter." But for the agriculture business, there is strong optimism and some risk.

Because of a strong GDP in 2021, it has improved demand and even though there are inflationary concerns, producers took advantage of this influx. "...restored working capital levels are bolstering foreign businesses and many producers have paid down debt and some have even used cash to finance the upcoming year-to-year operations, where as before many would have relied on financing to operate," according to Elizabeth Crawford in a March, 2022 article at foodnavigator-usa.com.

The article expresses that "rising land values is another reason for optimism...in 2022. But cautioned that land values are a bit of a double-edged sward and also fall into the risks category for the overall financial health of U. S. ag."