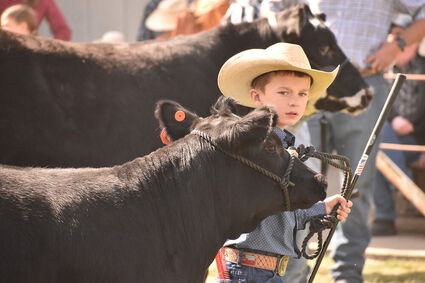 Gus Feider is the face of the 2022 Garfield County Fair where the community came together to show, share, and shine. The week-long events opened to spectators Friday through Sunday with displays of glorious foods, crafts, art, activities and so much more.

POMEROY–The Garfield County Fair's 2022 "Barnyard Luau" weekend brought many traditional features and some twists to others during the three-day event September 16-18. The county celebration started with the traditional parade, a chamber cowboy breakfast, many exhibits, a variety of activities, livestock sale, an ATV races, rodeo and plenty of vendors.

The fair got off to a great start as Robert Koller carried the flag ahead of an extraordinarily long parade of fair themed floats, Citizen of the Year Matt Slaybaugh for 2020, Lifetime Achievement for 2020 awardees Dave and Nancy Ruark, and Lifetime Achievement recipient for 2021 Muriel Bott; Pirate Cheer camp participants; UTV Endurocross entries; the first motorized firetruck in Garfield County-1927 Studebaker fire engine driven by Fire Chief James Cleveland, assisted by Harper Fruh who cranked the siren; Pirate Ponies (Burnstad family including kids Karl, Evelyn, Katie, Kevin and Kalgary); Lucky Horseshoe 4-H Merritt Scoggin on Promise, Heather Hastings on Pepper, friends Sarah Scoggin on Sally and Westelle Scoggin with Prairie Star; first place Fair Board float–Buzz and Woody from Toy Story and Stitch from Lilo and Stitch; and plenty of candy. County Commissioner Justin Dixon commented at the Garfield County Commissioners meeting Monday morning that there was "at least 100 pounds of candy" thrown along the parade route.

The Chamber of Commerce Cowboy Fair Breakfast was served at Maple Hall and the Hall of Fame Honoree Sheree Ledgerwood was celebrated for her dedication to service on Saturday. The tradition breakfast of scrambled eggs, pancakes, sausage, milk, juice or coffee was well attended and at 8 a.m., a brief recognition ceremony for the Honoree award took place.

Fair goers were treated to Buzz and Woody from Toy Story, who made an appearance at food court Sunday morning, Woody made it over to the rodeo where he rode in opening ceremonies and the American flag was carried by Peyton Newberg. The Pony Puncher flag was carried by Karl Burnstad.

This year, the poultry division held a virtual show due to the avian influenza concerns. Entries were photographed at home and the pictures hung with entry cards stating birds' name, breed, age, and exhibitor's name. Entries included chickens, ducks, peacocks and turkeys. It was for the same reason that a slight twist to the tradition was made to one of the favored Sunday activities--the Chicken Scramble. Men in inflatable chicken suits were used instead of live chickens. "They had three adult men dressed in blow up chicken costumes which were revealed to the crowed right before the scramble when they unloaded the giant chickens off of a horse trailer," said Monica Bartlow, WSU/Garfield County Extension. "Then the kids chased them around just like they did with the real chickens and the first three to pull off the tags hooked to the chicken's wings were the winners in each age group.

On Saturday, UTV race were held Saturday morning with an obstacle course, in field on far side of dry camps. That night, ATV races were held with a line-up of motorcycle and four-wheeler classes, keyhole, barrels, and barrel bending. 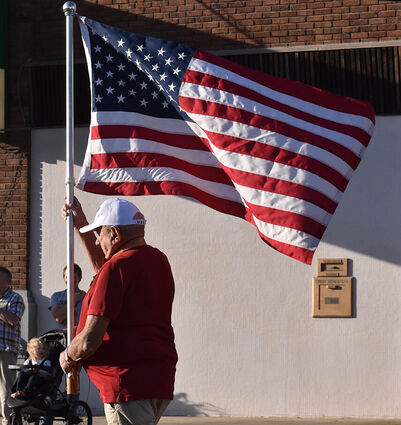 Open to the public, the Eastern Washington Agricultural Museum had many items from the past on display. Throughout each day, a member was giving a demonstration on how to make something, like rope or how a motor runs or bellows with steam. It is always an adventure back in time when one walks through the museum buildings and grounds.

The closing attraction of the 2022 Garfield County Fair was the Pony Punchers Rodeo with events for all ages from Mutton busting, barrel racing, calf roping, goat tail untying, to broncs and bull riding.

Exhibitors began the teardown of the displays and animal stalls at 4 p.m. The final thank you for coming, see you next year came at 5 p.m.