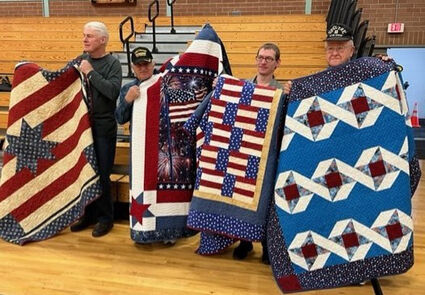 Four Quilts of Valor were awarded to Pomeroy veterans, from left to right, Jerry Moore, Ben Alling, Toby Boyer and Dennis Wolf, during the Veteran's Day celebration at the Pomeroy High School Gym on November 14.

POMEROY–Quilts of Valor were presented to four veterans during the annual Veteran's Day celebration at the High School Gym on Monday, November 14.

Four veterans were awarded Quilts of Valor at the recent veteran's day program at Pomeroy School District The gym was filled with students and guests as the veterans were honored. The traditional slide show was held with many new additions through the work of Ms. Tammy Domras and students of Pomeroy High School.

Jerry Moore, a Pomeroy High School graduate of 1967, served in the United States Air Force from 1967–1971. He earned the rank of staff sergeant. Jerry's quilt was made by Deb Waldher.

Ben Alling, father of Amy Ledgerwood, served in the United States Army from 1968-1971. He spent his time in Vietnam and in Germany as a welder-machinist. Alling's quilt was made by Alice Gwinn.

Toby Boyer, graduate of Pomeroy High School, then served in the Washington Army National Guard from 2004-2010. He was deployed to Iraq at Joint Base Balad and served the remainder of his time in the Army Reserves in Hayden Lake, Idaho. Boyer's quilt was made by senior Riley Thompson as her senior project.

Dennis Wolf, a Pomeroy High School graduate, 1957, served in the United States Air Force for 20 years. He spent over 500 days in the air. He was an aircraft navigator and tracked the tropical storms in the Pacific–known as being a "Typhoon Chaser". Wolf's quilt was made by Alice Gwinn.

The Quilt of Valor Foundation was started by Catherine Roberts in 2003 after her son was deployed to Iraq. The vision of this now nationally recognized organization out of a dream which showed a young soldier sitting on his bed exuding disappear. Then, with a quilt wrapped around him, his mood changed, healing him emotionally. Through the expression of this dream, volunteers began making quilts for active military service members as a way to wrap them in our appreciation for their dedication and sacrifice for our Country and its citizenry. Since 2003, and as of July 2022, over 318,483 quilts have been sewn by volunteers and given to service members and retired veterans.