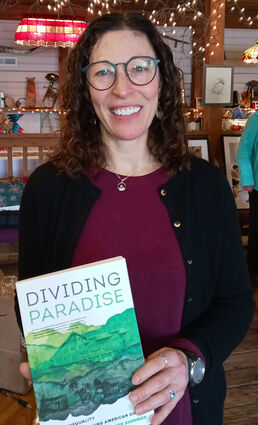 POMEROY–The Community Forum hosted by the Southeast Washington Economic Development Association presented Jennifer Sherman, Professor of Sociology at Washington State University, as speaker on the inequity found in rural communities, during the meeting held at the Pataha Flour Mill on November 15.

Professor Sherman is a part of the Humanities Washington Speaker's Bureau and she gave a talk called Diamonds in the Rough-The Gentrification of Rural Washington, discussing her book Dividing Paradise. The book is the result of 10 months of research she did in 2014-15 in a Washington town whose name is undisclosed for anonymity. She called it Paradise Valley.

In her talk, Sherman discussed the town's economy shift from a primarily agricultural and logging town to an amenity tourism town and the demographic shift that accompanied it. The change caused housing value to rise, which led to higher rent and property tax, as well as less stable, year-round jobs and more low-wage, seasonal jobs. Paradise Valley's scenery and access to outdoor activities drew new families, who conflicted with those who had lived in the town for decades and generations.

Paradise Valley, Sherman stated, became a town divided between 'old-timers', the families who had lived in town for more than twenty years, and 'new-comers', those who had moved to town more recently. According to her research, during the 2014-15 time period, it was more difficult for the 'old-timers' to obtain meaningful and lucrative jobs, housing, and necessities. On the other hand, the 'new-comers' who came to the area for a specific career, or money from a previous home or business, tended to have more economic security and opportunities. The research also indicated the two groups did not often mix and held prejudice against each other.

Sherman's conclusion was to encourage community engagement and building relationship between both groups of people.

Discussion after the talk concluded involved the suggestion of having a community center, which Sherman acknowledged as "a start, but it needs to be able to appeal to both the 'newcomers' and the 'old-timers'" to be an effective way to gather the whole community.

The next community forum will be hosted by the Pomeroy Chamber of Commerce in February.