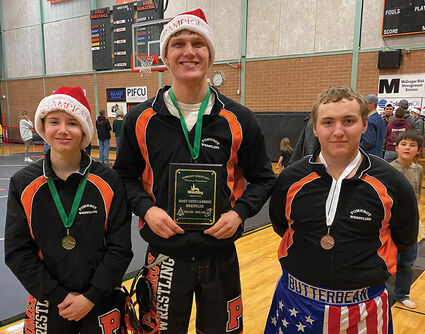 In a first for the Pirate wrestling program, Michealle DeBord, left, pinned three opponents to win the Women's 120-lb. Division at the Pomeroy Christmas Tournament last Saturday. Curtis Winona, center, was the champion of the 182-lb. class, and Nick Hastings, right, accepted the challenge of competing in a higher weight class, and finished third in the 220-lb. bracket.

POMEROY––It may be matched, but it'll never be bettered: for the first time in the history of the Pomeroy Wrestling Program, wrestler Michealle DeBord won three matches to win the Women's 120-lb. division at the Pomeroy Christmas Tournament here last Saturday.