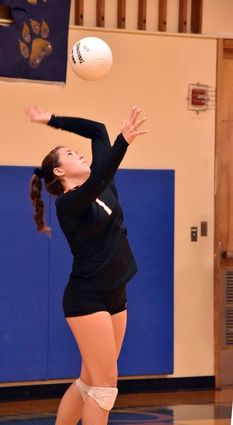 Serves and assists are two of Lady Pirate Heidi Heytvelt's contributions to the success enjoyed by the volleyball team. Against Prescott, Heytvelt served 100 percent and made 13 assists. Last week against Colton, Heytvelt made 21 assists and in the win over Colton, she made 27 assists, three ace serves and nine digs.

GENESEE–Personnel and fatigue played a role in the Lady Pirates' second-place finish in the Pea and Lentil Tournament here last Saturday as the squad slashed through Deary, Gar-Pal, Wallace and Colton before dropping the championship match to Genesee in two sets.

The Lady Buccaneers played a non-conference match against Orofino at home last Tuesday and travels tonight to Touchet. They host Gar-Pal on Oct. 15.

"The tournament ended a streak of 14 matches in two weeks (10 of those being tournament games) for us," said Head Coach Amy Smith. "I think fatigue showed for us toward the end of the day. We played the first four games without one of our starters, who missed due to personal reasons, and the championship game without two of our starters, an additional player was out due to an injury.

"We had some of our younger players step up for us big and fill those spots," Smith said. "Freshman Jillian Herres did a great job setting for us. The setter's role is a demanding one and can be compared to that of a quarterback in football. Jillian did a great job leading our offense and I am pleased we were able to compete for the championship."

Maddy Dixon was selected for the All-Tournament Team, which was voted on by the coaches, on the strength of 34 kills and 11 blocks in the tourney. Jillian Herres had 66 assists, and Alyssa Wolf had 10 aces and 18 digs.

Leading Pomeroy in kills, aces, and blocks was Dixon with 12, 3, and 5, respectively. Heidi Heytvelt led the Lady Pirates in assists with 21. Alyssa Wolf was tough on defense with 13 digs as was Keely Maves, who contributed four blocks. Jaden Steele and Sydney Watko each had four kills.

"This was a great team win for us," Smith said. "We showed improvement in a few key areas that we've been focusing on. So, as a coach that is rewarding to see. Once again, we had to fight back in the third set to win it. I am very proud of our team for working so hard.

"This game finished out our first round of league so we will get back to work to prepare for the second round," she said. "There is still room for improvement so we will have to continue to push ourselves."

Pomeroy rallied to defeat Colton in three sets 26-24, 25-12, 25-18 in Pomeroy Tuesday, Oct. 1. Dixon led in kills with 17 and Sydney Watko had six, including some momentum-changing kills. Heidi Heytvelt had 27 assists and also led in aces with three. Heytvelt also led in digs with nine. Dixon and Teagan Steele both had three blocks.

"We had to come from behind in sets one and three," Smith said. In set three we had a nine-point deficit at one point and were able to fight back to win it.

"I was most proud of the girls for persevering and not giving up," she said. "We struggled with passing and were more tentative than usual on defense but did a good job at gaining the momentum back at key times. Colton is scrappy and picked up a lot of hits as well as served well. It was a hard-fought win for us."