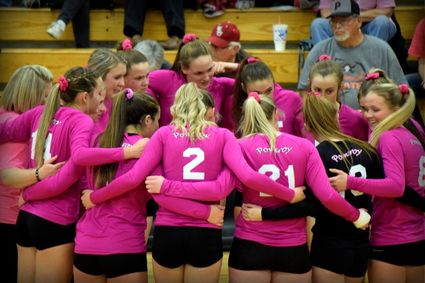 The Lady Pirates promoted Breast Cancer Awareness with pink jerseys in their October 22 match versus Colton, won in three sets. The team ran into trouble against Oakesdale but are poised to finish in the top spot in league with an 11-1 record, if Pomeroy defeats Prescott this week.

The Oakesdale Lady Nighthawks bumped and bruised the Lady Pirates last week – handing Pomeroy an unexpected loss – but the Lady Pirates, if they get a win over the 0-11 Prescott Tigers in a Senior Night and Homecoming match Tuesday, are favored to finish the 2019 campaign first in league.

Should Pomeroy beat Prescott, the Lady Pirates and Oakesdale will finish with identical 11-1 records, but the Buccaneers will be crowned league champions thanks to a pre-season tie-breaker draw.

With a win over Prescott, Pomeroy would host the League and District tournaments, which will begin Wednesday, November 6, at the Pomeroy gym. (See sidebar.)

Colton finished the season third at 7-5 after falling to the Lady Buccaneers in three sets on October 22, and St. John-Endicott/LaCrosse is in fourth place with a 6-6 record.

Oakesdale finished the regular season by avenging an earlier loss to the Bucs on their home court last week, ending with an 11-1 league record, 12-3 overall. Pomeroy is 10-1 with the final match against the Tigers to play. Results will appear in next week's newspaper.

Prior to the Oakesdale loss, Pomeroy cruised through Colton in three sets.

"Although we got better as the night went on, we just didn't play like ourselves," said Head Coach Amy Smith. "Oakesdale played very tough. They had a lot of energy and had a great offensive night.

"We were not aggressive enough offensively or defensively," she said. "We have some specific things to work on. We are hoping to get the opportunity to play them again down the road."

Maddy Dixon had 11 kills, Heidi Heytvelt had 23 assists and Alyssa Wolf had 10 digs. For Oakesdale, Gianna Anderson had 17 kills, LouEllen Reed had 34 assists, and Lizzy Perry had 19 digs.

Pomeroy beat Colton in Colton Tuesday, October 22, winning in three sets 25-14, 25-19, 25-21. Leading the team in kills was Dixon with 14. Sydney Watko and Jaden Steele each had five. Alyssa Wolf had 10 digs. Maddy Dixon led in blocks with four.

"I am proud of our girls for battling and fighting through us not playing our best volleyball," Smith said. "Colton played good defense against us and kept us on our toes. I was glad to see up fight through some adversity and come away with the league win on the road."

We are looking forward to finishing league play on Tuesday night at home against Prescott. It is Senior Night and we have some awesome seniors to celebrate.