Fired up to slow things down 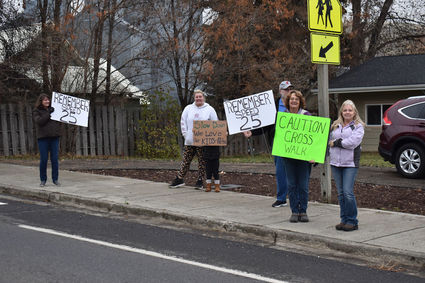 POMEROY–A determined group of parents, kids and other concerned citizens have been monitoring traffic entering Pomeroy from the west, holding up signs reminding vehicles to slow down to the posted 25 mph. speed limit and be vigilant about watching out for kids and animals crossing the road at the foot of Sunnyside Hill.

A near-tragedy was avoided recently when a logging truck almost struck a boy on his way to school in the morning. The youngster had started to cross the intersection from the north side to the sidewalk on the south side, but as he stepped out his older sister saw the truck coming into view around the bend in the road and pulled him back just in time. There is no sidewalk along this stretch of the highway on the north side.

Another family had their beloved dog killed a few weeks ago in a similar situation. Residents who live along this stretch have seen many other close calls and decided to take action. They state that many cars and trucks do not slow down at Third Street, where the sign reduces the speed limit from 35 to 25 mph. In addition, there are two signs indicating the upcoming crosswalk which some drivers are ignoring.

Sheriff Drew Hyer said his department will be watching this area more closely, and ticketing speeders. He also has another speed sign ordered similar to the one recently installed across from the post office. However, the new sign will be a mobile unit rather than permanently installed.

Some of the active participants in this mission to protect pedestrians include Shirley and Terry Brandon, Roberta Jerger, Kayla and Alyssa Miller, Lori Tucker and Juyne Weimer.