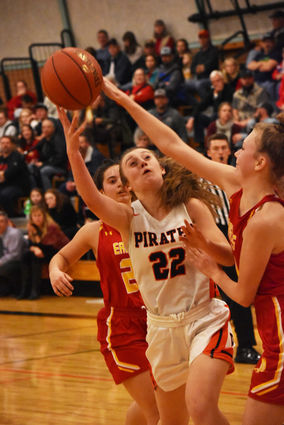 Pirate freshman guard Jillian Herres (22) was a force in the SJEL win, playing tough defense and attacking the rim, according to Coach Tai Bye. Pomeroy beat SJEL 57-27 and slugged out a 27-19 win At Gar-Pal.

PALOUSE–After cruising past SJEL Friday, the Lady Pirates ran up against Gar-Pal Saturday, Winning 27-19. Still undefeated, they are 4-0, 2-0 in league.

The Bucs hosted DeSales Tuesday, travel to Oakesdale Friday and resume after Christmas with a tourney at Davenport Dec. 27.

At Gar-Pal, the Pirates struggled offensively but were in good form defensively, said Coach Tai Bye. "That allowed us...