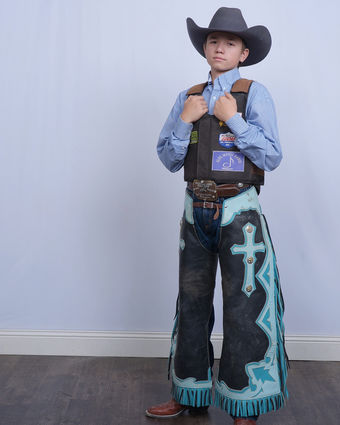 POMEROY–Local High School freshman Lane Shawley, returned from his first Junior World Finals Rodeo in Las Vegas, held during the week of December 3-11, 2019, without a win, but with an enthusiastic attitude. He competed with the Senior and Novice Saddle Bronc riders on December 5 and 7, at what was billed as the "Biggest Cowboy Christmas in Las Vegas" event, held next to the T-Mobile Arena, near the Las Vegas Strip.

Shawley completed his check-in duties of gear checks and a weigh-in, on December 4, then attended a "Back Ceremony" where he received his competition number to wear on his back.

his first ride on December 5, was on a horse named "Robin Eggs," but he was not able to cover his ride–an eight seconds ride without touching the horse with his free hand. He acheived five seconds.

His next ride was on December 7, using a horse named "T.P. Creeper." The results were the same as the first ride, with Shawley riding five seconds once more. However, this time he said he was glad he was bucked off because the horse hit the fence afterwards.

The "Short Go" took place on December 9, with the top 10 out of 21 riders qualifying. Shawley finished in eleventh place, just missing the opportunity to compete for the championship.

The Awards Ceremony was held December 10, with awards going to the first through sixth place finishers. $10,000 in prize money was split between the winners, and the "All Around Winner" received the use of a special horse trailer for the next year.

Participants in the Junior World Finals Rodeo were required to sell twenty $10 tickets to help offset the rodeo expenses and stock feed. Shawley sold about 300 tickets, and was able to keep fifty percent of the ticket sales from every ticket over the first twenty required.

When asked about the experience, Shawley said it was "really fun and I got to meet a lot of famous people." There was also a professional rodeo competition, Round 8 of the National Finals Rodeo, occurring in Las Vegas the same week, so he was able to attend that with his family.

Two things he said he learned was that Las Vegas was not what he had expected, and that different stock contractors have different levels of horses that they use for rodeos. Some buck harder than others and are harder to stay on. He realized that he needs to train harder and differently for next year's Junior World Finals.

To help with that, his parents bought him a "Mighty Broncy" which is a training mount that can be moved around to simulate the motion of a bucking bronc. He did not have that opportunity to help prepare him for this rodeo, which was his first Junior World Finals.

His goal is to continue to go to rodeo clinics, "which is where you get noticed" he said, and return to the Junior World Finals next year. Eventually he wants to get his Pro Card, and be a professional rodeo competitor.