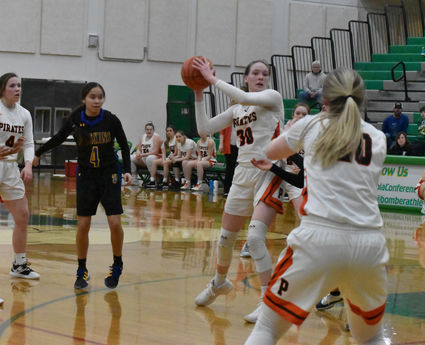 Maddy Dixon (30) was the game's leading scorer with 24, plus she cleaned the glass with 15 rebounds, some put backs for points. Dixon dished to Sydney Watko (20) on this play while guard Heidi Heytvelt (4) looks on.

RICHLAND–The Lady Pirates start their third consecutive return to the 2020 1B State Tournament today, March 5, at the Spokane Veterans Arena, facing the winner of the annual tournament's first round, either No. 7 Curlew or No. 15 Naselle, who will face off in the tourney's opening round Wednesday. Tip-off of Pomeroy's game will be at 5:30 p.m.

Behind a 24-point performance by Maddy Dixon, four treys by Emma Severs and cool ball handling by Heidi Heytvelt, first-ranked Pomeroy defeated the Wellpinit Redskins 61-39 here last Saturday to advance to the Spokane annual classic. The Lady Pirates are seeking to "finish" in this year's championship game on Saturday.

"I was very proud of my girls for their composure," commented Head Coach Tai Bye. "It was a hard fought game physically."

The Lady Pirates had to play controlled and disciplined if they wanted to win, Bye said. They also held the usually high-scoring Redskins to under 40 points, a team which had routinely won with a game total of 50 and 60 points-their highest win 82-51 over Northport.

Dixon cleaned up the boards, Bye said, snaring 15 misses and finishing with 24 points.

Heytvelt was tasked with bringing the ball up court against an angry swarm of quick and scrappy Redskin pressure. "Heidi was able to withstand a lot of pressure from the top and get the ball in and out," Bye said. "She did a really nice job staying in control and making them foul her." Wellpinit fouls outpaced Pomeroy's 16-9, and one of their starters, Jada Orr, fouled out with six minutes remaining.

Dixon was almost unstoppable in the first half where she scored 17 of her game-high 24 points for a 19-point half time lead, 39-20.

Dixon, Heytvelt and Sydney Watko broke a scoreless first minute of the game and Dixon added five more points for a comfortable 11-5 lead. Then Wellpinit's Orr drove the baseline and drained a three to make in 11-10, prompting a Pomeroy time out. Dixon and Severs, from the arc, finished the quarter with the Lady Pirates leading 16-10.

Second-quarter strategy was to feed Dixon, who drew fouls and scored four free throws, and hit a basket on a Wolf assist, and put back a S. Watko trey. This 8-1 run ended with a Wellpinit time out, but Pomeroy continued with Severs popping in a bucket on an inbounds play and Heytvelt pushing the ball up the court and slipping right through the key for a pull-up basket.

S. Watko and Tyshea Twoteeth exchanged baskets, and Keely Maves hit a pair of gifters on an Ashlynn Hill foul with 1:33 to play in the half.

Pomeroy again kept the Redskins from scoring and Severs squared up and swished another three. Wellpinit scored again but wolf was fouled on the play, and made both of the one-and-one.

The Redskins resumed the second half with pressure, which cost 5-7 junior Amelia Seyler, who was defending Dixon, her third and fourth fouls.

But Dixon scored Pomeroy's first five points, then Severs dialed in her range and drained two more three pointers. Wolf dished to Dixon for Pomeroy's last bucket of the quarter and a 52-30 lead.

The press ignited a mini-run by Wellpinit, who scored six unanswered points over the first three-plus minutes of the quarter, and cut the difference to 16 points-a number easily cut down by a barrage of three pointers, fully within the Redskins' capability.

But Sydney Watko scored on an inbounds play at 4:18. Then a minute of rough-and-tumble ensued, with Severs driving the key for a bucket and foul shot.

The Redskins' game was off the whole game and here, following that six-point burst, it again iced up down the stretch. After Severs' three-point play, Heytvelt finished both shots of a one-and-one, and Maya Kowatsch, a 5-6 junior guard, took a Heytvelt assist up for Pomeroy's last basket in the 61-39 win. 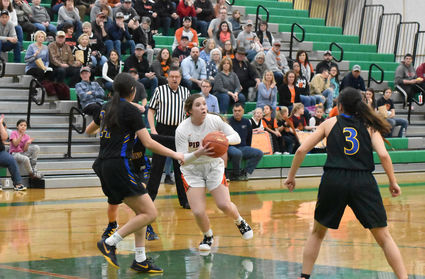 Point guard Heidi Heytvelt (4) spent a lot of time shaking off pesky Wellpinit defenders, who harried her all the way up court. Heytvelt came through with flying colors, setting the offense in motion, challenging the key when defenders collapsed on teammate Maddy Dixon, and dishing assists to open players.