Fair Board moving forward with plans to hold fair 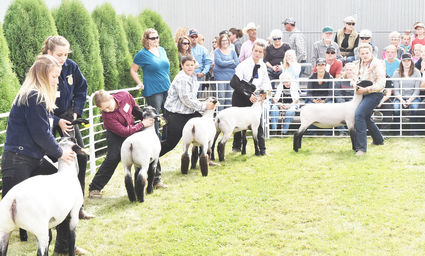 The 2020 Garfield County Fair may have a different look as Fair Board members grapple with issues related to COVID-19 restrictions, but as of the group's May meeting, plans are to move ahead with the annual September event.

POMEROY–Plans to move forward with the Garfield County Fair in September were made at the May 19 Fair Board teleconference meeting with the "Phasing" process as its measurement. Due to the ongoing concern of COVID-19, the board also voted to restrict the 2020 fair to Garfield County residents only, and consider each subsequent year separately.

The discussion as to how to approach this year's fair started when Fair Board Treasurer Lisbeth Randall mentioned there had been inquiries from people outside the county wanting to show swine at the fair. Travis Ledgerwood thought it best to have no animals outside the county shown, no premiums, no ribbons and no money for the out-of-county entries. Susie Bowles stated avoiding outside involvement would minimize germs, and it would also minimize revenue. She was adamant about not wanting germs brought in. It was then decided by the board to restrict the 2020 fair to Garfield County participants only in all exhibits.

Registration forms will require an "experienced individual" to accompany young children in the ring and must be signed by a parent or guardian. Registration deadline for goats, sheep and pigs is June 15, and the 4-H and FFA animals must be weighed on June 2, so those entries will already be known and identified. Parents would know if younger kids can share a pen with their older siblings. Open beef registration is set for September 1. Exhibitors can obtain livestock registration forms from Randall at the extension office.

Randall pointed out the need for finding other superintendents. Nick Waldher has been superintendent of the beef department for many years and would like to be off. Bob Johnson would like to step down from the cereals department. The current flower and vegetable superintendent is unable to do it this year. Randall emphasized any changed to the premium book needed to be sent to her by the end of May. She also told the group there is a woman who would like to teach line dancing twice a week for two hours a day. Field thought she should be charged for four hours a week, or two hours per class and Leta Travis agreed due to any cleaning and maintenance involved. The last item mentioned was the possibility of moving eggs to be judged to the baking department. This will be looked into and determined later.

Debbie Bishop contacted Fair Board President Sara Lunsford indicating the mounted shooters would like to practice at the arena. There would be a maximum of eight shooters. They cannot hold a club shoot this year, but would like to hold a clinic.

Commissioner Johnson stated presently only five people in a group were allowed in Phase 2, however, Phase 3 is scheduled to begin in Garfield County on June 1. For now, the group needed to reserve four dates over the summer and the board voted to charge $50 per half day.

The Garfield County Fair Board met via teleconference on Tuesday, May 19, with sixteen members and guest participating. Minutes from the last regular meeting, held in February, were read and approved. The minutes from the special livestock meeting were read. The treasurer's report for the organization showed the receipt of the state allocation of $31,603.00, bringing the current balance to $40,633.00. Treasurer Lisbeth Randall told the group it did not have to worry about sending the money back if the fair ends up being cancel due to the COVID-19 coronavirus. The Eastern Washington Agricultural Museum (EWAM) did not present an update this month.