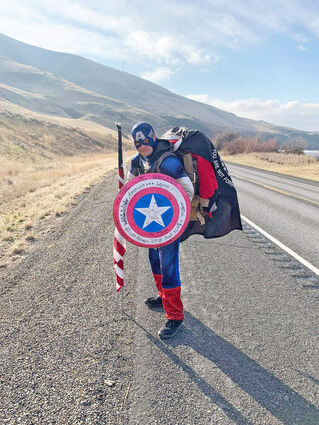 Captain America, a.k.a. Allen Mullins began his walk for veterans in 2009 which took him across the United States in one year. This summer, his trek will take him to 48 state capitals.

POMEROY–Captain America, a.k.a. Allen Mullins, passed through this fair little town Tuesday afternoon, January 26, on a walk to benefit military veteran Gary Jorgens. Captain America had recently been in Pullman and Clarkston, and was heading west on Highway 12.

Mullins is from Dalton, Ga., and according to information on his facebook page, he "began walking for veterans in 2009, giving up h...