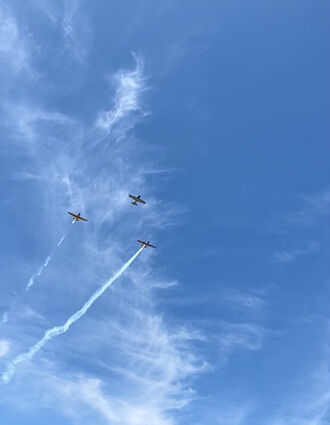 "Hangar 180" aircraft in formation were led by Pomeroy native and 1992 PHS Gary Peters in position No.1 in a North American P-64 World War II fighter. In position No. 2 was Amelia Hilsen, a Horizon Airline pilot in a WWII trainer North American AT-6, and flying position No. 3 was Chris Carswell, also in an AT-6.

POMEROY–A moving tribute to the fallen veterans of Garfield County culminated in two flyovers by members of the "Hangar 180" group out of Lewiston, Idaho on Saturday May 29 at 12 p.m.