ON A BICYCLE BUILT FOR TWO 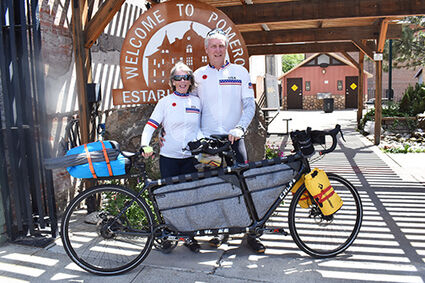 Tandem cyclists Mark and Sherri Kreider took an overnight breather at the City Park in Pomeroy during their "Portland-to-Portland" cross-country adventure. Typical cyclists passing through this area do so individually, but tandem riding allows the couple to take a bit of time to enjoy more of the sites along the way, such as the Veteran's memorial Park downtown Pomeroy.

POMEROY–Tandem cyclists Mark and Sherri Kreider, of Arvada, Colo., stopped in Pomeroy overnight on Wednesday, June 16, setting up camp in the city park, on their cross-country journey across the northern United States.

Calling it the "Portland to Portland" adventure, the couple began their trek at Fort Stevens, Ore., on the Pacific coast. They traveled the Lewis and Clark trail through Portla...