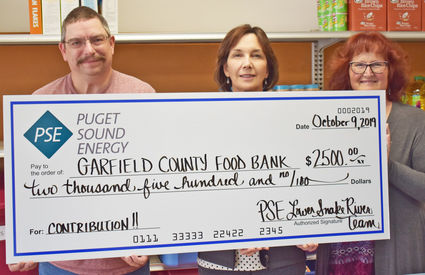 POMEROY-Anne Walsh, Puget Sound Energy Senior Wind Resource Advisor, presented a contribution of $2,500 to the Garfield County Food Bank on October 9. There are no stipulations on how the funds may be used by the Food Bank, so they can be applied to the organization's greatest needs as they arise. The Food Bank is funded by federal and state monies, as well as grants. Local grants have come from the Shepherd Foundation, Puget Sound Energy and Primeland.

Volunteers are the heart and soul of the Food Bank, and all are welcome to assist with the various aspects of providing food to those in need in our community. In addition to Susie Bowles, Manager, other current officers include Dan Lewis, President; Joanne Cassetto, Vice-president; Mary Helen Wilsey, Treasurer; Lisbeth Randall, Secretary, and board members Butch Burgess, Bea Fuchs and Louise Munday.

The Food Bank is a non-profit organization, staffed by many volunteers that willingly give of their time, from the position of Manager, to the board members, to monthly worker bees who show up to box and bag up all the commodities. These folks generously give of their time due to their love and commitment to our community. Without all their endless hours of work many families would go hungry, and currently eighty-one families are served, made up by 207 individuals.

Presently, food items are ordered from four separate entities on the second Thursday of each month. Food sources include Blue Mountain Action Council, Second Harvest, Northwest Harvest and Pomeroy Foods. The delivery truck comes on the third Tuesday. The boxes of groceries get put together the third and fourth Wednesdays, and then are available for pickup on the third and fourth Thursday mornings of each month.

In the 1970s, volunteers gave out cheese, butter, powdered milk, cornmeal, rice, flour, and a meat product to low income and unemployed individuals at the Senior Center, sponsored by the government TFAP (Surplus Commodities) program. This led, in 1993, to Garfield County operating an independent food bank from the Senior Center, which had recently remodeled the pool room for that purpose. In 1994 Garfield County Food Bank became a legal food bank and gained Federal and State funding.

For a number of years, the Service Club provided about 75 Christmas baskets weighing at least 100 pounds to needy families and individuals. The Service Club joined with the Food Bank and this program has continued to the present.

In the beginning, the Garfield County Food Bank served eight families. In May of 2012 the Food Bank distributed 5,227 pounds of food to 146 clients in sixty-four households.

Late in the year 2006, the Food Bank moved from the Senior Center to a building donated by the Human Services board at 865 Main Street, which formerly housed the Laundromat and Planetary Pizza. Norm Martin was the coordinator for the Food Bank until Chris Pawlik took over. Shelving and a large freezer donated from what had been Berglund's grocery store, plus the great amount of added space, made the building much more usable than the Senior Center.

In the past, on the third Monday of every month, several men would gather at the Food Bank to unload the truck that brings the food. A core group of seven men were sometimes joined, during the school year, by students. There were several farmers and others who help when time permitted. When the truck pulled up to the curb, it was quickly unloaded.

Currently, the frozen food is put in one of the five freezers. Food that requires refrigeration is placed in the walk-in cooler. Most of the year, sacks of onions, potatoes, rice, oatmeal, and beans are unloaded. Boxes of apples, sometimes pears, plums, tomatoes, oranges and even pineapple and papaya come on the truck. The canned goods are put on shelves in areas marked for the government agencies which provide the funds. There are also cartons filled with boxes of cereal, potato chips, pasta such as noodles and spaghetti, and similar foods.

Items which do not come on the truck are bought with donated funds. These include flour, sugar, milk, bread, margarine and some paper products. The Food Bank receives discounts from the stores where these are purchased. Large Lewiston stores donate outdated pastries and surplus items. Besides donations of money, there are a number of food drives by various organizations including the Christian Church. Many people give to several food drives during the year. Without the generous giving of the people of Pomeroy, it would be difficult to keep the shelves from being bare.

Evan Bartels and Danner Maves are doing their Senior Project at school this year to benefit the Food Bank. Among their planned activities, they will be holding a food drive on November 10, 2019, centering around food items typically used during the holidays, as well as personal toiletry items.

Chris Pawlik was the manager of the Food Bank for many years. He was not only the manager, he was our leader and most of all, our friend. His passing has left giant shoes to fill. All of us who worked with Chris had no idea the amount of responsibility and countless hours he donated to our community. We currently have a group of dedicated, hard-working people from the community that have stepped up to work together to fill the tremendous void Chris' absence has left. I want to personally thank each and every one of them for helping our Food Bank continue to serve our community. Every volunteer is greatly appreciated.