Lady Pirates No. 1 in State! 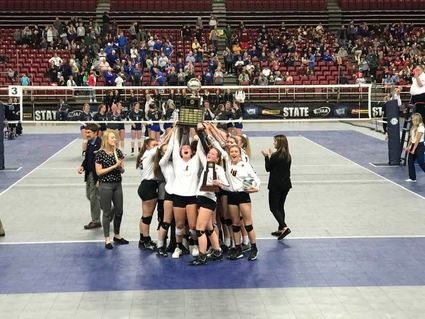 Pomeroy's Lady Pirates hoist another championship trophy high in celebration of their rubber-match victory over Oakesdale in the 1B State Volleyball Tournament in Yakima.

YAKIMA–After three years of yielding the spotlight to Oakesdale, the Pomeroy Lady Pirates Volleyball Team swept the WIAA 1B State Volleyball Tournament, defeating Southeast rival Oakesdale in a five-set championship match here Friday. The win snapped a four-year championship streak for the Lady Nighthawks, three of those at the expense of the Lady Pirates, in 2015, 2016 and 2017.

The crown is the first championship for the Pomeroy Volleyball Program since the 2014-15 season.

Pomeroy defeated the Naselle Lady Comets in the first match, recovering from a case of the doldrums in the third set for the three-set win, 25-21, 25-11, 27-25, on Thursday, November 14. The victory set up the next match against the winner of the Wilson Creek-Grace Academy match.

In the quarterfinal match Thursday, the Pirates faced Wilson Creek in an evening contest, slashing through the Lady Devils' opposition in three decisive sets, 25-20, 25-14, 25-12. 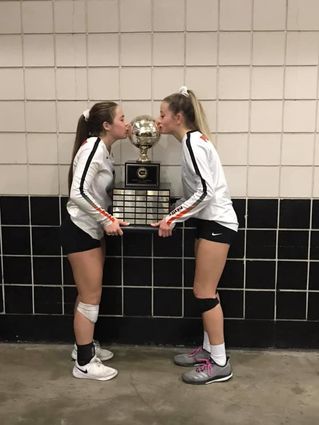 In Friday's opening match, the Lady Pirates started the day off with a challenging match against perennial powerhouse Almira Coulee Hartline, who placed second last year to Oakesdale. The first set was white hot, and went to the WIAA RPI top-ranked Lady Warriors by a seldom-seen score of 32-34. Pomeroy evened it up with a 25-19 win in the second set, and took a 2-1 lead with a third-set win of 25-15.

But the Lady Warriors of ACH rallied with a 14-25 tilt to even it up 2-2, sending the decision to a fifth set. Pomeroy came through with a 15-11 win to advance to the championship court.

Oakesdale, who handed the Lady Pirates a loss in the District Tournament, had little trouble with Odessa, taking the semifinal match in three sets, 25-19, 25-12, 25-16.

The fifth and deciding set was a taut, extra-points win for the Lady Pirates, 16-14.