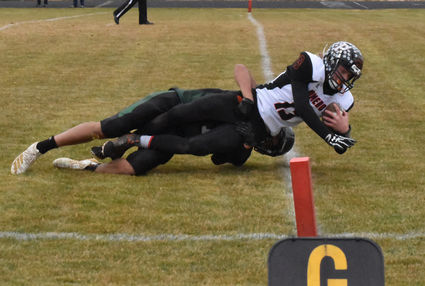 Pirate receiver Trent Gwinn (13) caught a 28-yard pass from Brandon Bales and broke the plane for a Pomeroy touchdown.

CHEWELAH–The Pirates 2019 season ended here Saturday with a well-fought but lopsided 56-20 loss to the Selkirk Rangers in the state-play-in game. Pomeroy finished the season 6-5 overall.

The Rangers had an answer for Pomeroy's quickness and agility, covering pass routes well and smothering the Pirate rushing game. Pirate scoring-usually prolific by the one-two punch of quarterback Brandon Bales and receiver/running back Trent Gwinn, was held to just three touchdowns and 242 yards of total offense compared to Selkirk's 443. The Rangers' dominance overshadowed its 15 penalties for 132 yards.

Selkirk scored twice in the first quarter and Pomeroy once, a Trent Gwinn sprint to daylight of 49 yards. After the first 12 minutes, the Rangers held a surmountable 16-6 lead.

But the Rangers notched the next three touchdowns in the second stanza, on an 18-yard run by Zech Curran and the other two pick-sixes by defensive back Jay Link.

Selkirk took its first possession of the third quarter 55 yards in eight plays, scoring on a five yard plunge by Curran.

The onside kick was snagged by Sidney Bales at the Pirate 48. The quick try for a touchdown, a 52-yard pass from Bales to Gwinn, was incomplete.

On fourth and 13, Bales connected a 15-yard pass to tight end Braedyn White for a first down. Bales rushed for another Pirate first down, and on fourth and four, the Pirates suckered the eager Rangers for an offsides penalty and a third first down of the drive.

The drive was stopped by a Davis interception at the five, giving Selkirk the ball after a 25-yard run back.

The third gave way to the fourth quarter as Selkirk marched the ball into Pirate territory, scoring on a 22-yard pass to Curran and a 48-12 margin.

Sidney Bales signaled for a fair catch on the kickoff and was hit by a Ranger special teams player, moving the initial line of scrimmage into Ranger territory at the 32 yard line.

Brandon Bales carried three times for a third and short, but left the game with a bloody nose. Substitute quarterback Gwinn threw to Danner Maves for a first down on the Ranger 13. Next play, Davis intercepted Gwinn's would-be touchdown throw to Sidney Bales, but Davis intercepted and fell in the end zone.

Selkirk capitalized on a Pirate face-masking penalty to move into Pirate territory in one play, then scored on a 42-yard pass from Link to Davis.

Pomeroy, with Brandon Bales back in the game, moved into Ranger territory with a 17-yard pass to Gwinn, then he found Gwinn again in the clear for a 42-yard scoring pass play. Bales's extra point made it 56-20 with under a minute to play. 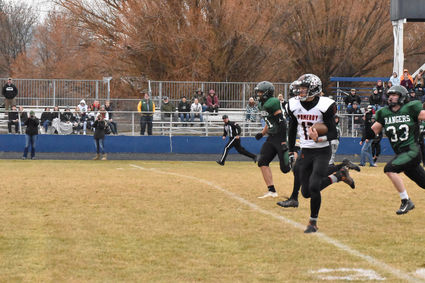 Pirate All-Division wide receiver Trent Gwinn (13) put Pomeroy on the scoreboard with a 49-yard breakaway run with Selkirk Rangers trailing, in the first quarter. Gwinn counted for the Pirates' three touchdowns in the game, two rushing and one a 28-yard pass from Brandon Bales.