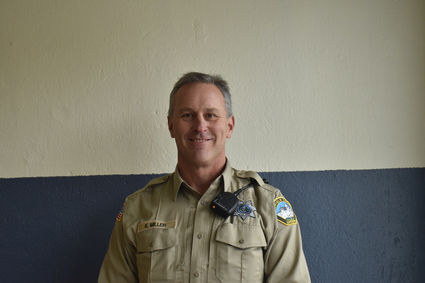 Kurt Miller, the newest recruit as a Sheriff's Deputy, graduated the academy December 13, 2019, and is currently in training with the Garfield County Sheriff's office.

POMEROY-The Garfield County Sheriff gained a new deputy when Kurt Miller graduated from the law enforcement academy in Spokane, December 13, 2019. He is currently in training with Under Sheriff Danserau until March. He bears a resemblance to a television character in a current series called "The Rookie," being the oldest candidate to graduate in his class at the academy. Coincidentally, that is his favorite show to watch.

Miller was born in Idaho Falls and spent his first six years there, but moved several times around the state of Idaho as he grew up, including to Salmon, Sandpoint and Coeur d'Alene, where he graduated from high school in 1987. He also attended Boise State University and graduated with an associate's electronics degree.

He was employed by Micron Technology for 21 years as a customer quality engineer, handling product quality issues. The company manufactured semi-conductors and computer memory products. Though he was satisfied with his job at Micron, he felt he lacked the opportunity to make an impact on a more personal level with people. Having lived in the Boise area since 1989, he was drawn back to the desire for the small-town environment.

Miller's daughter Rachel was really the catalyst that brought him and his wife, Stephanie, to Pomeroy. Rachel married a local Pomeroy man, Nick Bartlow. When she and Nick made plans to move back to Pomeroy, Miller and his wife soon followed. First they came for a visit and decided they could really be happy here. And then the deputy position with the Sheriff's department came open and things began to fall into place for the Millers. After an interview with Sheriff Hyer, Miller decided that law enforcement could be just the right career choice for him, even at the age of 51.

After moving to Pomeroy and purchasing a house in the summer of 2019, Miller entered the law enforcement academy in August, where he spent the next four months in training, and graduated in December, 2019. He feels like he hasn't had much time to become familiar with many people here yet. But, he likes the small town atmosphere. His two youngest children, who had been homeschooled before moving to Pomeroy, are enrolled at the Pomeroy Elementary School. Daughter Sophie is in the second grade, and son Caleb is in the fourth grade. He and Stephanie were very impressed with the school when the children were allowed to attend a half day when they visited, just to try it out.

Stephanie works remotely for an accounting firm in Nampa, Idaho, which has worked out very well for her. Daughter Rachel works at the Garfield County Hospital District as a nurse, son Chase works for the Air Force in Arizona, and another son, Kole, is in the Air National Guard in Boise. The Millers also have two grandchildren. Deputy Miller's parents have also joined them and now live in Pomeroy as well.

Miller loves the outdoors, including fishing and hunting. He especially loves ice fishing, but realizes that he won't be doing that around here. But he has had an opportunity to go snow mobile riding recently. He also has an affinity for theme parks, especially riding roller coasters. He says he will miss the "Lagoon" theme park in Utah which was his favorite, but he is anxious to become an active contributing member of the Pomeroy community.